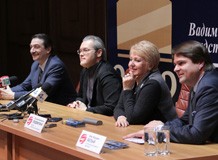 On 30 January Vadim Repin gave a press conference in Novosibirsk, where he presented the Trans-Siberian Art Festival. This project in which the world-famous violinist first appears in the role of artistic director will be held from 31 March to 12 April, 2014 on the stage of a new concert venue of Novosibirsk State Philharmonic Society – Arnold Kats State Concert Hall. The unprecedented project will gather in Novosibirsk the stars of world art.

11 concerts featuring stars such as Valery Gergiev, Kent Nagano, Svetlana Zakharova, Olga Borodina, Nikolai Lugansky, Mario Brunello, and many others will be held within 13 days of the festival.

The musician said that he thought for a long time about the idea of the festival, and decided to realize it this year because Novosibirsk Philharmonic Society received a new concert venue – Arnold Kats State Concert Hall. "There are several «whales» on which stands our festival — said Vadim Repin — first – certainly, the State Concert Hall. Second – Novosibirsk Philharmonic orchestra, which has always been famous for the level and the name of its founder Arnold Kats, whose role is difficult to overestimate. So, I believe the dedication of the festival to the 90th anniversary of the maestro is very logical, correct and necessary. The third component of success is a professional team and the support provided by the Ministry of Culture of Novosibirsk and personally the Governor of Novosibirsk region Vasily Yurchenko.”

«Novosibirsk is a place where my professional life has started, the place where I always feel my roots. This city gave me an education, formed my character. That is why, the festival is very dear to me,»- the musician said.

Vadim Repin noted the fundamental aspects of the festival program. In each concert a world-class star is announced, all programs are fundamentally different. The musician said that when inviting artists to participate in the project, he asked them to choose a composition that is most interesting and important for each of them. «This approach, in my view, will provide the highest level of concerts — Repin explained, — not just because the stars will take part in them, but also because they will execute nice and interesting things, and, hence, they will present themselves in the best emotional state».

An international team, bringing together experts from Russia, Germany, Switzerland and the United States is working for this festival. Novosibirsk State Philharmonic Society plays a key role in this project. «Today we are entering a new level of event management, and the philharmonic society is a serious major equivalent partner of the festival» — said the director of Novosibirsk State Philharmonic society Tatiana Lyudmilina.

Due to the high importance of the project special attention is directed to its media coverage. During the festival, the organizers will provide a presence in Novosibirsk of more than 30 representatives of foreign publications, including Euronews, Die Welt, La Repubblica and others.

Two world premieres and one Russian premiere will take place in the frames of the Festival. On 3 April the Concert for violin and orchestra, written by Israel composer Benjamin Yusupov especially for Vadim Repin will be performed. On 9 April — the arrangements made by Alexey Igudesman for the project involving several violinists. On 10 April the program «Pas-de-deux for toes and fingers» will be presented for the first time in Russia, representing the synthesis of ballet and violin art performed by Svetlana Zakharova, Johan Kobborg, Vladimir Varnava, Andrei Merkuriev and Vadim Repin. Festival concerts will take place not only in Novosibirsk but also on the stages of Iskitim, Berdsk, Akademgorodok. At the moment we are working on formation of programs of the Trans-Siberian Art Festival for 2015 and 2016.