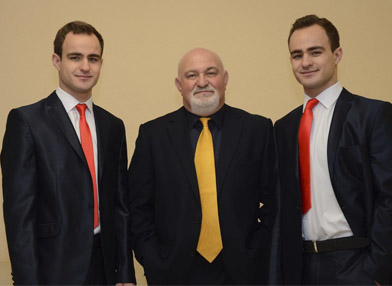 On 13th and 14th of April in Novosibirsk and Akademgorodok twin clarinetists Alexander and Daniel Gurfinkel will perform. Their father, also clarinetist Michael Gurfinkel will come on the stage with them The program "Planet of the clarinet", held in the framework of the Trans-Siberian Art Festival, will gather world-famous violinist Vadim Repin, pianist Sergei Tarasov and collectives of the Novosibirsk Philharmonic Society. In the program there are jazz treatment of the famous concerts of Vivaldi's "Four Seasons" and the music of Mozart, Prokofiev, Saint-Saens and other composers.

"This is the first concert in the history of Trans-Siberian Art Festival, where wind instruments come to the fore, - says the artistic director of the project, a world-renowned violinist Vadim Repin - evening program will show a great instrument - a clarinet in all its virtuoso brilliance and genres variations. It is important that, together with the stars of world music on the stage that evening will perform collectives of the Novosibirsk Philharmonic - Philharmonic Chamber Orchestra conducted by Alim Shakhmametiev and Filarmonica-quartet».

Daniel and Alexander Gurfinkel is only duo of twins-clarinetists in the world, which is part of a unique family trio. At the head of a trio of brothers is their father Michael Gurfinkel - one of the leading clarinetists of Israel, the soloist of the Israel Symphony Orchestra and the Israeli Opera.

At the age of 12, Alexander and Daniel have played with the Israel Philharmonic Orchestra at the invitation of the legendary Zubin Mehta, who they have repeatedly cooperated afterwards with. The duo has performed with the Philharmonic Orchestra of Zagreb and Belgrade, chamber groups "Virtuosos of Moscow" and "Soloists of Moscow", the Israel Symphony Orchestra and others. Among the countries where the duo went on tour there are the US, Hong Kong, Slovenia, Azerbaijan, Ukraine, Slovakia, France, Germany, Switzerland, Austria, Italy, Vatican City, South Africa. Michael Gurfinkel performs as a soloist with such conductors as Lorin Maazel, Riccardo Muti, Kurt Masur, Valery Gergiev and others. He actively acts in Israel and elsewhere, teaches, gives master classes of clarinet playing.

Sergei Tarasov is the winner of numerous competitions, including the International Competition named after Tchaikovsky. He has performed on such stages as the Great Hall of the Moscow Conservatory, Moscow International House of Music, Great Hall of the St. Petersburg Philharmonic, Suntory Hall in Tokyo and Festival Hall in Osaka, Verdi Hall in Milan, the Sydney Opera House, the Mozarteum in Salzburg, Gaveau in Paris, Maestranza in Seville.
Trans-Siberian Art Festival