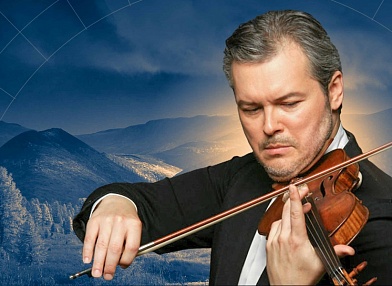 From 9th to 24th of April in Novosibirsk, with the support of the Governor and the Government of the Novosibirsk region Trans-Siberian Art Festival will be held for the third time, its artistic director is a star of the world classical music, a native of Novosibirsk, violinist Vadim Repin. In 2016, the festival will for the first time expand its geography beyond Russia. Along with concerts held in Novosibirsk, there will be several in Moscow, Ekaterinburg, Krasnoyarsk, Omsk.

"From the very beginning, the central idea of the festival was Novosibirsk and its geographical position - it is, as the Trans-Siberian Railway, a kind of cultural and natural bridge between East and West. This city is a center, where the geographical areas "grow" from, in which the festival is developing, "- said Vadim Repin.

"In 2016, along with concerts in Russian cities the festival will include eight concerts in five cities of Israel, two concerts in South Korea and six or seven in four cities in Japan, and one of them will be held under the patronage of Prime Minister Shinzo Abe - told Oleg Bely, executive director of Trans-Siberian Art Festival - most of the programs will be held in Novosibirsk. Out of 26 soloists who will perform at the festival concerts worldwide, Novosibirsk audience will hear 19 of them, out of 11 conductors – eight of them will conduct in Novosibirsk. Vadim will perform in seven programs and eight concerts Novosibirsk".

One of the key participants of the project is Novosibirsk Philharmonic Orchestra, which will perform in six programs. Vadim Repin has repeatedly emphasized the crucial role played by the collective in the implementation of Trans-Siberian Art Festival plan. Also in two concerts of the festival the following collectives of Novosibirsk Philharmonic will perform – Chamber Orchestra and Filarmonica-Quartet, Novosibirsk virtuoso domrist Andrei Kugaevsky will also take part in the festival program.

Arnold Kats State Concert hall remains the main venue of the festival - the new Philharmonic Hall opened in 2013 and, according to Vadim Repin, became one of the necessary conditions for the implementation of the idea of the festival. "Hall has significantly changed for the better - even since the previous festival - said Vadim Repin, characterizing the acoustic improvements, maintained by the Philharmonic during the last year – Very right things were done".

The project Vadim Repin & Greta Garbo in “Love” will become world premiere in the framework of the festival – silent film of 1927 "Love" will be “sounded” with violin Concerto by Aphrodite Raickopoulou, which is devoted to Vadim Repin. "A couple of years ago a similar in its sense project “Faust” was implemented in London – an original soundtrack was written for the film, and it had an incredible success” - said Vadim Repin, - Second project is Love. Working on music for it Aphrodite was inspired by violin and by me, in some way”. On February 25th an official premier of the project was held in Royal Festival Hall, where was an official opening of the British-Russian cross-year of language and literature.

A traditional project “Children to children” will include the performances of Youth symphony orchestra of Novosibirsk specialized Music School conducted by Vladislav Yankovsky and Murtuza Bülbül. Special guest of the concert will be young conductor’s father, singer, actor, composer, the Ambassador of Azerbaijan in Russia Polad Bülbüloğlu. The soloists will be young musicians from Israel and Novosibirsk – Danielle Akta (cello), Yuliya Belan (piano) and Olesya Skorokhod (violin).

Also in the framework of the festival there’s a concert dedicated to Sergei Prokofiev’s music, Alekzsey Igudesman prepares a special program “Waltzes of the World”, chamber music will be presented in concert of Vadim Repin, Misha Maisky, Andrei Gridchuk and Boris Berezovsky, in the framework of the festival there will be Daniil Trifonov’s recital.

Regional program of the III Trans-Siberian Art Festival includes two programs – “Go to Ordynskoye” on 18th of April and “Go to Iskitim” on 19th of April with the participation of Clara-Jumi Kang (violin), Henri Demarquette (cello) and Sergey Tarasov (piano).

The organizers of the Festival are Vadim Repin’s Fund, Novosibirsk State Philharmonic Society, the project is supported by the Governor and the Government of Novosibirsk Region. Project Vadim Repin & Greta Garbo in “Love” is being implemented with the support of Goethe Institute in Novosibirsk.

As a prologue was the performance of Novosibirsk Philharmonic Orchestra in concert hall of Mariinsky Theatre in St. Petersburg on 11th of March. The concert in Mariinsky Theatre was the final chord of an orchestra’s great European tour, which programs were visited by more than 9000 European listeners. The tour was dedicated to the orchestra’s 60th anniversary. The direction of Mariinsky Theatre, Trans-Siberian Art Festival and Novosibirsk State Philharmonic Society presented the orchestra this anniversary gift, which gave a start to the Festival-2016 on one of the best world stage. In St. Petersburg the violinist, student of Zakhar Bron Mone Hattori, known to last year Trans-Siberian festival listeners, performed with the orchestra. Novosibirsk Philharmonic orchestra was conducted by Gintaras Rinkevicius – the artistic director and chief conductor of the collective. In the concert there were the Overture to Weber opera "Oberon", Wieniawski Concerto for Violin and Orchestra number 1 and Tchaikovsky Symphony number 4. "Libertango" by Astor Piazzolla was performed as encore.

The first Trans-Siberian Art Festival held in March-April 2014, was dedicated to the memory of the conductor Arnold Kats, who created Novosibirsk Philharmonic Orchestra in 1956 and conducted it until passing away in 2007. Within two years of the festival thanks to it the following musicians performed in Novosibirsk such as Charles Dutoit, Leonard Slatkin, Kent Nagano, Olga Borodina, Lera Auerbach, Jean-Yves Thibaudet, Svetlana Zakharova, Rudolf Buchbinder and many others.