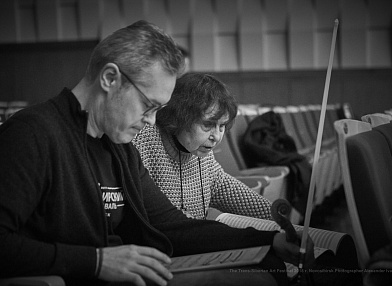 Today, April 2nd, at Arnold Kats State Concert Hall, the world premiere of Sofia Gubaidulina's "Dialogue: I and You" will be performed by Vadim Repin and Novosibirsk Philharmonic Orchestra conducted by Andres Mustonen. The performance will be the culmination and at the same time the completion of the main program of the V Trans-Siberian Art Festival in Novosibirsk. The world premiere will be attended by its author, one of the largest living composers of nowadays. Also this evening will sound Gubaidulina's composition "The Horseman on a White Horse", "Unfinished Symphony" by Schubert and Piano Concerto by Schumann, soloist is Yukio Yokoyama.


«Long ago I asked Sophia Gubaidulina to write for the festival, but for a long time nothing happened, and some time ago she announced that she had finished composing music, says Vadim Repin, artistic director of the Trans-Siberian Art Festival. And then half a year ago - like a bolt from the blue! - the message suddenly came from her that she had made up her mind. The score was finished a few weeks ago. This work is born of a genius, and I will do my best to convincingly embody it on stage. The name "Dialogue: I and You" is given because the work has a double dedication: it is written for the festival, but it is dedicated to the soloist and conductor, me and Andres Mustonen».

Sofia Gubaidulina explains: "The name of this composition reflects my delight upon reading the book "I and You" by Martin Buber. He writes: "For human beings the world is twofold, just as the basic words he can express contain a double meaning. Indeed, the basic words are not singular entities but pairs. One of these basic words is the pair I – You, another – I – It. <...>

The two main metacosmic movements relating to the creation of the world – expansion and force of gravity, the yearning of oneness – find their human realization, their highest spiritual form in this relationship: I and Thou”. When I read such reflections it particularly pleases me that all this is directly related to the art of music, the life of sounds. Duplicity. The yearning for expansion into eternity, while persistently trying to close in around a centre and asserting it. The duplicity of the cravings of the actual sound material and the drama within sound structures, All this became very clear to me.

Due to some fortunate circumstances all my excitement coincided with the initiative of two of the greatest musicians of our time, Vadim Repin and Andres Mustonen, to create something together, something for violin and orchestra. This initiative reached me at the most intense moment of my reflections upon the dialogical anthropology of Martin Buber. To create a dialogue. A dialogue between the “I” of the soloist and the “I” of the orchestra’s conductor”.

One of the largest living composers of nowadays Sofia Gubaidulina already met Novosibirsk Philharmonic Orchestra - in 1997 in Japan, when the collective performed her compositions. However, she flew to Novosibirsk for the first time.

Together with Alfred Schnittke and Edison Denisov, Sofia Gubaidulina was in the top three avant-garde and experimentalists, whose music was officially not recognized in the USSR. She is the author of more than one hundred symphonic works, compositions for soloists, choir and orchestra, instrumental ensembles, music for theater, cinema and cartoons. Now her works are performed by the best musicians, and the philharmonic societies of the world are waiting for the opportunity to be the first to present her works to the public.

In 1992, the composer emigrated to Germany, where she lives to this day. Member of the Berlin Academy of Arts, she was awarded the French Order of Merit, the Imperial Prize (Japan), the Polar Music Prize (Stockholm), the Golden Lion of the Venice Music Festival, and the BBVA Foundation (Spain) international award. In the works of the 80s, the influence of numbers and their regularities is traced, which plays an important role in organizing the rhythm and form of works. An important role in the composer's work is played by the origin - the synthesis of East and West is reflected in her work, but its basic component was the postulates of Christianity, and the composer interprets the process of writing as a sacrament. Often the impression is created that her music is born from complete silence, with an almost Bach’s correlation of intellect and emotion. His book "Saint John Passion" and "Saint John Easter", where the excerpts from the Gospel and the Apocalypse are contrasted, Gubaidulina described as "bold theological experience" and designated as "opussummum" - the culmination of creativity.

The world premiere is an integral part of the program of the Trans-Siberian Art Festival from the first year of its existence. During this time, the premiere of the works of Benyamin Yusupov, Lera Auerbach, Eniott Schneider was performed in Novosibirsk. The program of the fifth Trans-Siberian Art Festival included five premieres, all works were created for the festival. Along with the composition of Sofia Gubaidulina, they included Violin Concerto by Novosibirsk composer Andrei Molchanov, "Concert for Chief with Orchestra" by Mikhail Krutik, which will be performed in Krasnoyarsk, "Koberia" for two violins with the orchestra of Alexey Igudesman, Concerto Grosso for Violin, cello and two young soloists-violinists "iGeneration" by Daniel Schnyder.

The concerts of the fifth Trans-Siberian Art Festival, headed by Vadim Repin, will be held from March to July 2018. The festival program in Novosibirsk will end of 2nd April, though the Russian part of the Festival will last to May 13 and will include Krasnoyarsk, Moscow, St. Petersburg and Samara in its route. The foreign part of the route will take place in the USA and Japan in June and July.

The key point in the geography of the festival is Novosibirsk - the hometown of the artistic director of the project. By tradition, small towns of the Novosibirsk region will not be left without attention, the list of which has expanded significantly this year: Berdsk, Krasnozyorskoe, Toguchin, Karasuk.

One of the key participants in the project is Novosibirsk Philharmonic Orchestra. Vadim Repin repeatedly stressed the decisive role played by the collective in implementing the idea of ​​the Trans-Siberian Art Festival. The main venue of the festival always remains the Arnold Kats State Concert Hall - the new Philharmonic Hall opened in 2013 and, according to Vadim Repin, has become one of the necessary conditions for the implementation of the idea of ​​the festival.