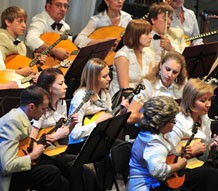 On 23 January the Orchestra of Russian Folk Instruments will perform at the Philharmonic Chamber Hall the musical program that will be later presented at the Vth Festival of Russian culture RussenKo in France.

On 25 January the Orchestra of Russian Folk Instruments will perform at the Festival of Russian culture in the French city Le Kremlin-Bicetre. It is the first time when such a scale orchestra is invited to the festival. The oldest musical ensemble will present masterpieces of the representatives of Russian composers’ school – M. Glinka, P. Tchaikovsky, N. Rimsky-Korsakov. Also French audience will hear the arrangements of Russian folk songs. Solo parts will be executed by the artist of Novosibirsk State academic opera and ballet theater Nicolay Loskutkin (bas) and soloists of the orchestra Andrey Gurevich (balalaika), Vadim Shelepov (balalaika), Anastasia Kirilenko (domra), Oleg Zverev (button accordion). The concert will take place on the stage of the theatre ECAM.

Also the soloists of the orchestra will provide a master class of Russian folk instruments for the students of musical school and conservatory.

The detailed information about the Festival “RussenKo” – on the site www.russenko.fr/ru
Last news
The season of Novosibirsk Philharmonic Orchestra ended with a triumphant gala concert with opera stars
The Orchestra of Russian folk instruments takes part in the Ural Forum of National Orchestras
The 8th Trans-Siberian Art Festival in Novosibirsk is over
Conductor Charles Dutoit, winner of two Grammy awards, will perform with Novosibirsk Philharmonic Orchestra
Photo reports