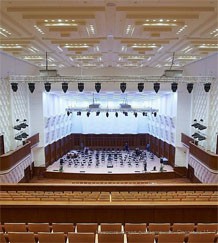 In September the first performances of philharmonic bands will take place on the stage of the concert hall named after Arnold Kats. Already now you could get a seat in the hall for these performances as well as for the whole season. Season tickets for concerts at the new Philharmonic Hall are on sale.

Concerts of the season tickets №№1, 1а and 11 are duplicated on the stage of the Palace of Science of Academgorodok.
Last news
The season of Novosibirsk Philharmonic Orchestra ended with a triumphant gala concert with opera stars
The Orchestra of Russian folk instruments takes part in the Ural Forum of National Orchestras
The 8th Trans-Siberian Art Festival in Novosibirsk is over
Conductor Charles Dutoit, winner of two Grammy awards, will perform with Novosibirsk Philharmonic Orchestra
Photo reports