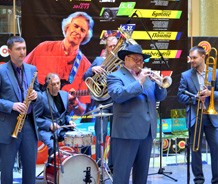 On 7 November at 12-00 at the metro station «Lenin Square» jazz orchestra of the Novosibirsk Philharmonic Society «Siberian Dixieland» will play. The band celebrates its anniversary — 25 years since the creation – by execution of popular jazz standards.

«Choice of a place for the concert was not accidental. The first concert of «Siberian Dixieland» was held on 8 November 1988 at the metro station «Lenin Square» under the leadership of the founder of the band Boris Balakhnin. To celebrate the jubilee we will play at the same place on 7 November and on 8 November we will give a big concert on the stage of Arnold Kats State Concert hall. We invited all the musicians who have ever played in our band«, — told the honored artist of Russia, artistic director of the Jazz Orchestra » Siberian Dixieland» Sergei Gershenovich.

Since the creation the jazz orchestra «Siberian Dixieland» toured to the cities and republics of the former USSR, and in 1991 started touring abroad: Finland, Estonia, the Netherlands, Germany, China, the United States, Norway, Switzerland, Poland. In total the musicians realized 31 tours, including Algeria (Africa). Musicians took part in American festival dedicated to the 100th anniversary of Louis Armstrong, as well as in the largest jazz festival of Europe — in Montreux (Switzerland). In 1994, the «Siberian Dixieland» opened his own season-ticket at Novosibirsk Philharmonic society and released its first CD. At the moment the band has 14 recorded albums.