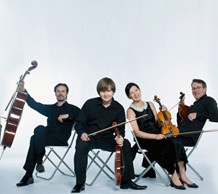 On 15 and 16 November Filarmonica-quartet gave two concerts in the frames of the tour in Perm and Yekaterinburg. Concerts were supported by the Ministry of Culture of Russian Federation under the «All-Russian Philharmonic seasons.»

On 15 November in the Organ Concert Hall in Perm Novosibirsk musicians performed «Dissonance»- quartet by Mozart, Quartet in D-major by Respighi and «American Quartet» by Dvorak. On 16 November in Yekaterinburg Filarmonica-quartet performed at the opening of the season ticket «Hearts of four».

«All Russian Philharmonic Seasons» – is a project of the Ministry of Culture of Russian Federation. Its goal is to create a common cultural space of Russia. Since 2003, the Ministry of Culture and Moscow Philharmonic Society have been realizing a project aimed at revival of concert activity throughout Russia.
Last news
The season of Novosibirsk Philharmonic Orchestra ended with a triumphant gala concert with opera stars
The Orchestra of Russian folk instruments takes part in the Ural Forum of National Orchestras
The 8th Trans-Siberian Art Festival in Novosibirsk is over
Conductor Charles Dutoit, winner of two Grammy awards, will perform with Novosibirsk Philharmonic Orchestra
Photo reports