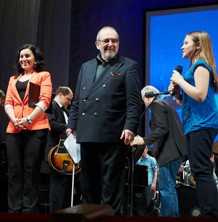 On 18 May Novosibirsk Philharmonic Society took part for the second time in the international event «Night of Museums». The organizers prepared a two-hour program, which included a concert in the Chamber Hall, Lenin House visit, exhibition «Masterpieces of world art.» Tantamareski were installed in the lobby, everyone could make a picture and feel himself a philharmonic artist.

This year the number of visitors was increased comparing to the previous year, but not everyone who wishes could get to the Philharmonics. The format of the event was also changed. The guests of the «Night of Museums» visited basement, philharmonic museum, rehearsal rooms, backstage and the stage.

««Night of Museums» is a very important event for us, — Vladimir Kaluzhsky said, — we take great pleasure while organizing it and communicating directly with the visitors. 90% of new people come to get free from the stereotype about stiffness and academicism of a philharmonic society. And these new people stay with us.”

The following year the organizers plan to realize the «Night of Museums» at the State Concert Hall named after Arnold Kats.