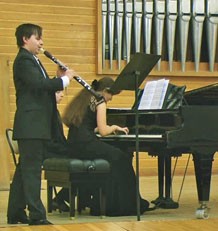 On 24 January the works of the winners of composer’s contest Partita will be performed in the Musical salon of Novosibirsk Philharmonic Society. Performers: Lev Terskov (piano) and the ensemble Fresca musica: Danila Efremov (clarinet) and Ekaterina Predvechnova (piano).

In the first part of the concert you will listen to the compositions by musical classics of the XX c. Edison Denisov and Sofia Gubaidullina. And in the second part — the works of the winners of composer’s contest Partita will be performed: second prize winners Ilya Alexandrov and Andrey Popov and third prize winnersYuri Yukechev and Iraida Salnikova. The jury decided not to award the first prize.

The laureates and the winners of the contest will be awarded at the concert. The contest was devoted to the 85th anniversary of A.F. Murov and held in the frames of the creative project «Murov days» approved by Order of the Ministry of Culture of Novosibirsk region.