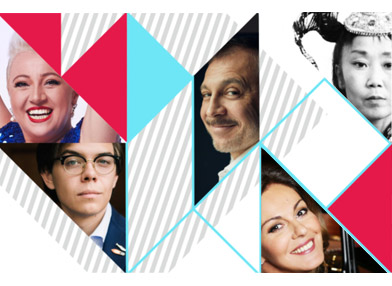 The most versatile festival of the Novosibirsk Philharmonic season 2020, the White Festival, is over. From November 11 to December 25 eleven concerts took place at the best concert venues of the city, each of which became a real event: more than 3.5 thousand listeners attended the concerts. The transfer of the festival from the traditional end of summer to the winter period made it possible to significantly expand the range of genres and styles of festival programs, and they, in turn, are interconnected not only by the degree of uniqueness, but also by the white dress code traditional for the project.

The White Festival opened on November 11 with an enchanting performance by Teona Kontridze, a symbol of the capital's most incendiary parties, who sang jazz, jazz-punk and pop music, vividly announcing the festival. Within the framework of the White Festival Novosibirsk listeners were inspired by the originality of ethnic culture: they met the Celtic Samhain together with the “Street Fiddlers” folk group and heard Buryat folklore in the synthesis of modern musical styles performed by “Namgar” ethno group.

The festival continued with the performance of Roman Viktyuk "Tenderness" based on the novel by Anri Barbusse. The tragic love story, embodied on the philharmonic stage by Sati Spivakova, Basinia Shulman and the Filarmonica Quartet, immersed the viewer in the world of the protagonist, experiencing the entire spectrum of emotions - from the height of passion to cold calculation. “White premieres. Sati’s-fiction" together with the Philharmonic Chamber Orchestra were presented by the titled Moscow soloists Dmitry Illarionov (guitar) and Nikolai Sivchuk (button accordion). A worthy setting for contemporary music, mostly minimalistic, was created by the production designer Alexei Choy with the help of video scenography and stage design.
The White Festival took a short break from music to talk about fashion trends. Tim Ilyasov - stylist, journalist, TV presenter, teacher - spoke about current trends, why certain things, images, silhouettes are in vogue, about the generational factor, about the events of 2020 and their impact on changes in fashion.

Jazz! One of the brightest lines of the "White Festival". The world famous musician, academic and jazz pianist, singer, laureate and winner of prestigious competitions, Oleg Akkuratov, as part of his trio, presented the “Tribute to Ray Charles” program. The festival ended with a stunning jazz "Nutcracker" from the "Good Evening" trio - a crossover project that synthesizes jazz, classical, pop, folk and rock. The Philharmonic Chamber Orchestra conducted by Alim Shakhmametyev accompanied the “Star Concert”, putting a stylish chord at the end of the White Festival.