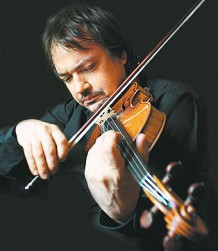 On 9 and 10 February the concerts of Novosibirsk symphony orchestra under the direction of the laureate of international competitions Sergey Krylov took place at the Palace of Science of Academgorodok.

Sergey Krylov was opened to the musical world by Mstislav Rostropovitch who said about his young colleague: “I think Sergey Krylov enters today the five best violinists of the world”.

The musician performed at such prestigious venues as Berlin and Munich Philharmonics, the Musikverein and Konzerthaus halls in Vienna, Radio France Auditorium in Paris, Megaron in Athens, Suntory Hall in Tokyo, Teatro Colon in Buenos Aires, La Scala theater in Milan, as well as at music festivals in Santander and Granada, at the festival «Prague Spring».

In 2006 after more than 15-year break (since 1989 Sergey Krylov has been living in Cremona, Italy), the violinist performed at home by giving a concert in Yekaterinburg with the Ural academic philharmonic orchestra under Dmitri Liss. Since then the musician is a frequent and welcome guest in Russia.

Since 2009 Sergei Krylov is the chief conductor of Lithuanian Chamber Orchestra. In 2010 the musicians took part at the VI annual international music festival «Crescendo».

The concert program is composed by masterpieces of world music: Symphony №3 by Beethoven, Concerto for Violin and Orchestra and Concert overture «Midsummer Night's Dream» by Mendelssohn.
Last news
The season of Novosibirsk Philharmonic Orchestra ended with a triumphant gala concert with opera stars
The Orchestra of Russian folk instruments takes part in the Ural Forum of National Orchestras
The 8th Trans-Siberian Art Festival in Novosibirsk is over
Conductor Charles Dutoit, winner of two Grammy awards, will perform with Novosibirsk Philharmonic Orchestra
Photo reports