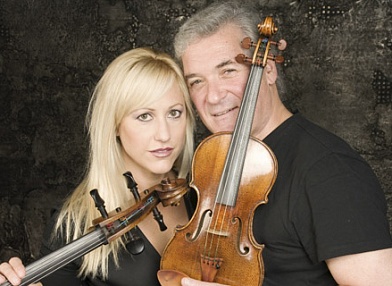 On 9th of April Vadim Repin’s Trans-Siberian Art Festival will be opened with the concert with Pinchas Zukerman - legendary musician - a violinist, violist, conductor, 21 times nominated for Grammy. At the concert he will perform as a soloist and as a conductor.

On 9th of April Vadim Repin’s Trans-Siberian Art Festival will be opened with the concert program "On the way again!" Novosibirsk Philharmonic Orchestra, as well as the stars of the festival - a violinist, violist and conductor Pinchas Zukerman (Israel), cellist Amanda Forsyth (Canada), conductor Pietari Inkinen (Finland) will perform at the concert.
In the first part the music of Mozart, Vivaldi and Saint-Saëns for violin, cello and orchestra will sound, Pietari Inkinen will conduct. In the second part Novosibirsk Philharmonic Orchestra will perform Brahms’s Symphony № 1. It will be conducted by Pinchas Zukerman.

Pinchas Zukerman is a violinist, violist, conductor, and teacher. There are more than 100 CDs in musician’s discography, among them the recordings with Daniel Barenboim, Jacqueline Dupree, Isaac Stern and Itzhak Perlman highlight. Joint recordings of Pinchas Zukerman with Itzhak Perlman have been twice awarded the Grammy Award, and the musician himself was nominated for the most prestigious music award more than 20 times.

Trans-Siberian Art Festival will take place in Novosibirsk from 9th to 24th of April. The artistic director of the Forum is the star of the world of classical music, a native of Novosibirsk, violinist Vadim Repin. In 2016, the festival for the first time the will expand its geography beyond Russia. Domestically, along with concerts held in Novosibirsk, there are concerts in Moscow, Yekaterinburg, Krasnoyarsk, Omsk. The organizers of the Festival are Vadim Repin’s Fund, Novosibirsk State Philharmonic Society, the project is supported by the Governor and the Government of Novosibirsk Region