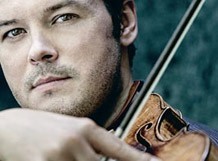 Vadim Repin gave a chamber concert for the metropolitan public in the residence of Russian Ambassador in Washington. The Ambassador Extraordinary and Plenipotentiary of Russia to the USA Sergey Kislyak introduced the musician to the audience, and Vadim Repin described the program of the upcoming festival. The Festival will take place in Novosibirsk in March-April, 2014.

“This is our promotional tour, if you will,” said Repin. “Later we will have meeting with journalists in New York city, and present our festival, because we want everyone to know about it.” He also said that the Festival would be presented in Hong Cong, Beijing, Paris, London and Moscow.

The festival is dedicated to the memory of the conductor Arnold Kats, who created Novosibirsk Philharmonic Orchestra in 1956 and was its unchallenged leader it until his death in 2007. Important impetus to the emergence of the festival was opened in Novosibirsk in September 2013 — Opening in Novosibirsk in September 2013 of the State Concert Hall named after Arnold Kats — a modern concert venue with 1100 seats designed specifically for classical music concerts, which made possible invitation to the city the musicians of the highest level — gave an important impulse to the idea of the Festival.

Novosibirsk ensembles will also appear on the stage together with invited musicians. Novosibirsk philharmonic orchestra will appear in 5 concerts from 12, including the concert-opening of the Festival under Kent Nagano and the concert-closing under Valery Gergiev. The Chamber orchestra of Novosibirsk philharmonic society will take part in the special project of Vadim Repin and Svetlana Zakharova, connecting ballet and music.

Full program of the Trans-Siberian Art Festival one the site of Novosibirsk State Philharmonic Society: http://philharmonia-nsk.ru/festivals/transsibirskiy-art-f