Vadim Repin, a world-famous violinist, will congratulate the philharmonic society 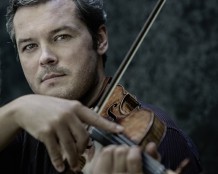 Concert on December 25 will be the culmination of the International Festival «Classics», devoted to the 75th anniversary of the Philharmonics and the entire jubilee year. Vadim Repin — an outstanding musician, a star of the first magnitude in the world of music, the critics called him «the best of living violinists.» On December 25, Vadim Repin will perform Concerto for Violin and Orchestra of Finnish composer Jean Sibelius with Novosibirsk Philharmonic Orchestra under the direction of the artistic director and chief conductor Gintaras Rinkevicius. Other philharmonic ensembles also will take part in the concert.

«Performance of Vadim Repin with Novosibirsk Philharmonic Orchestra at such important Philharmonic concert is very symbolic – Lev Krokushansky, the director of the orchestra, says — Once this team was the first orchestra and Maestro Arnold Kats — the first conductor with whom little Vadik Repin appeared on the stage. We are an important part of history for each other.»

Another important event will take place on the day of the jubilee concert at the philharmonic life: on 25 December major construction works in the new concert hall were completed.