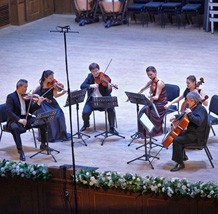 On 2 June the stars of the Trans-Siberian Art-Festival will perform in the program of the festival “Stars of the white nights” in Saint-Petersburg. The artistic leader of the Trans-Siberian Art-Festival, violinist Vadim Repin and the cellist Alexander Knyazev will play together with the students and graduates of Novosibirsk special music school and conservatory. The program will include the sextet “Souvenir de Florence” by Tchaikovsky. There will be an on-line broadcasting of the concert.

The sextet “Souvenir de Florence” was twice performed in the program of the Trans-Siberian Art-Festival in April. Together with Vadim Repin and Mario Brunello the sextet was performed by the students of the special music school (college) Anna Tanaka (violin) and Antonina Popras (viola), and also graduates of Novosibirsk State Conservatory Ilya Tarasenko (viola) and Sofia Shayuk (cello).

The sextet will be performed today at the Concert hall of the Mariinsky theatre with the same musicians on stage, but the part of the first cello will be performed by the famous Russian musician Alexander Knyazev. Together with the Youth orchestra of the Mariinsky theatre Vadim Repin will perform a rhapsody “Gipsy” by Ravel and Alexander Knyazev – Concert for cello and orchestra by Haydn. Conductor – Christian Knapp. The concert will be broadcasted online on the site mariinsky.tv. The concert and the broadcasting will start at 19.00 Moscow time.

Joint performing of well-known stars and young musicians is one of the concept components of the program of the Trans-Siberian Art-Festival, which was held in Novosibirsk for the first time in March-April 2014.

Trans-Siberian Art-Festival positions Novosibirsk region as a region of high level of culture both in Russia and in the whole world. The events of the festival were highlighted in Russian press and in more than 30 foreign editions, in particular BBC Magazine, Gramophone, Euronews, FAZ, Focus, Die Welt, La Repubblica, Musical America. A movie about the festival shot by Mezzo TV channel will soon be released.

The organizers of the festival are the Fund of Vadim Repin and Novosibirsk State Philharmonics. In 2015 the Trans-Siberian Art-Festival will take place in the end of March-beginning of April.