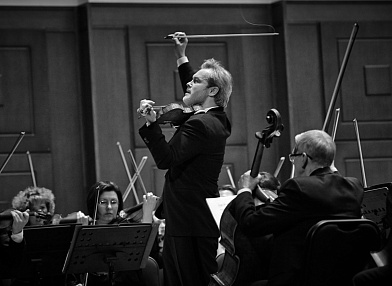 On February 25th Vadim Repin will officially open the British-Russian cross-year of language and literature with his performance at London’s Royal Festival Hall. Vadim Repin and the Philharmonia Orchestra conducted by Frank Strobel will carry out the world premiere of a unique project – a new symphonic score for Violin and Orchestra by Aphrodite Raickopoulou. It was written as the new soundtrack for the silent film from 1927, "Love", based on Tolstoy’s novel "Anna Karenina". Greta Garbo performed the main role in this movie. The new music will be performed during a live screening of the film.

On April 15th, this project will be presented in Novosibirsk within the framework of Trans-Siberian Art Festival, the artistic director of which is Vadim Repin. The Trans-Siberian Art Festival will be held in April 2016 in Novosibirsk for the third time. An inherent part of its program is an annual world premiere of a composition by a contemporary composer, written especially for the festival. Aphrodite Raickopoulou’s work is dedicated to Vadim Repin.

"A couple of years ago a similar in its sense project “Faust” was implemented in London – Aphrodite Raickopoulou wrote an original soundtrack for the film, and it had an incredible success” - said Vadim Repin

Trans-Siberian Art Festival will be held in Novosibirsk from 9th to 24th of April. The artistic director of the Forum is the star of classical music world, a native of Novosibirsk, violinist Vadim Repin. In 2016 for the first time the festival will expand its geography beyond Russia. Domestically, along with Novosibirsk, the concerts will be held also in Moscow, Yekaterinburg, Krasnoyarsk and Omsk.

One of the key participants of the project is Novosibirsk Philharmonic Orchestra, which will perform in six programs. Vadim Repin has repeatedly emphasized the crucial role played by the collective in the implementation of Trans-Siberian Art Festival plan. Also in two concerts of the festival the following collectives of Novosibirsk Philharmonic will perform – Chamber Orchestra and Filarmonica-Quartet.

The prologue to the festival will be the performance of Novosibirsk Philharmonic Orchestra at the Concert Hall of Mariinsky Theatre on 11th of March. The performance held under the auspices of the festival will be dedicated also to the 60th anniversary of the key collective of Novosibirsk Philharmonic Society. Conductor is artistic director of the collective Gintaras Rinkevicius, soloist - a student of Zakhar Bron, a participant of the second Trans-Siberian Art Festival Mone Hattori (violin).