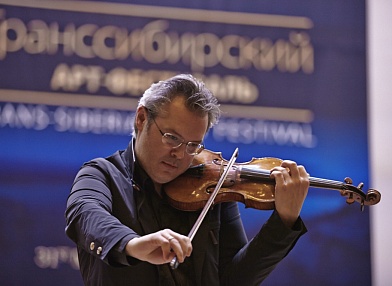 The second Trans-Siberian Art-Festival opened in Novosibirsk on 22 March with the concert of soloists of the leading world opera houses and Novosibirsk Philharmonic Orchestra under the baton on Gintaras Rinkevicius. The opening night was dedicated to the 175th anniversary of Tchaikovsky. Such soloists as Anna Samuil (Berlin opera), Elena Belkina (Vienna opera), Dmitry Popov (Mariinsky theatre) and the artistic director of the Trans-Siberian Art Festival Vadim Repin, who performed the aria of Lensky, arranged for a violin.

Zoryana Kushpler, who was initially announced in the program could not come to Novosibirsk due to health reasons. “It is a real happiness, that Elena Belkina had some free days on her agenda and she managed to be with us and graced the opening of the festival” – Vadim Repin said.

Lyubov Burda, the assistant of the authorized representative of the President in Siberian Federal district, read the official greeting of Vladimir Putin before the opening of the festival. The governor of Novosibirsk region Vladimir Gorodetsky opened the festival officially. The largest musical forum of the region is held by the Administration and the Governor of Novosibirsk region.

The Trans-Siberian Art-Festival in Novosibirsk will be held till 5 April and will consist of 15 concerts with the participation of world known figures, such conductors as Charles Dutoit, Leonard Slatkin, Dmitry Yurovsky, Gintaras Rinkevicius, Dmitry Liss; violin players – Vadim Repin, Akiko Suwanai, Yvri Gitlis, Zakhar bron and his young students – laureates of international contests; pianists Jean-Yves Thibaudet, Rudolf Buchbinder, Konstantin Lifschitz; viola player Maxim Rysanov; cello players Alexander Knyazev and Alexander Buzlov and also collectives: Borodin-quartet, Ural Philharmonic orchestra, ensemble Lendvay&Friends.
In 2015 the concerts of the festival will also be held in Krasnoyarsk, Omsk and Moscow, but, according to Vadim Repin, Novosibirsk will remain the center of the festival.

“We continue to get offers from different countries, - Vadim Repin said at the press-conference, - For 2016 I can confirm you that Tel Aviv will be included into our program.

We will have 5 concerts together with the Israeli symphony orchestra under the leadership of James Judd. Now we are holding negotiations with Japan, England and Switzerland. This significant international interest to the festival is the consequence of resonance of the first Trans-Siberian Art Festival in 2014”.
The festival will contain a world premiere: on 27 March Vadim Repin and Novosibirsk Philharmonic orchestra under the baton of Dmitry Yurovsky will perform Violin concerto №3 De Profundis composed by Lera Auerbach specially for Vadim Repin.


The program of the Trans-Siberian Art Festival includes symphony and chamber music, documentary, vocal, cross-over and visual art. The exposition of Maria Kononova – young artist whose pictures are exhibited in Moscow, Paris, Milano and other big cities – will be opened on 22 March at Arnold Kats State Concert Hall. On 2 April the exposition will be presented in Krasnoyarsk. On 23 March two documentaries by John Bridcut will be presented by the director and Vadim Repin-„Magic and Myth of Karajan“ and „Requiem – genre history“.

«Master-classes is a new significant direction in the festival program, - Oleg Bely, the executive director of the Trans-Siberian Art Festival remarked, - all our guests, who had some free time, agreed to share their mastery and experience to a young generation of Novosibirsk musicians. There will be master classes of Vadim Repin, Konstantin Lifshitz, lera Auerbach and other musicians”. Oleg Bely also told how much the scale of the festival changes: “The project became much bigger: if in 2014 it took place in 3 cities, included 4 orchestra concerts and united 200 participants, then this year it unites 600 participants, 7 cities and 11 collectives. But the Trans-Siberian Art Festival remains our joint project with Novosibirsk Philharmonics”.

This year, 15 representatives of Moscow and international mass media are invited to work with the festival. We planned a mutual project with “Orpheus” radio, which supposes the broadcast of concerts by this all-Russian radio station and then preparation of a series of programs for the European radio broadcasting associations with a further broadcast for 2 years.

The first Trans-Siberian Art Festival which took place in March-April 2014 was dedicated to the memory of Arnold Kats, who founded Novosibirsk Philharmonic orchestra in 1956 and who had been its leader till his disease in 2007.
The festival concerts will be held in Novosibirsk region – at the venues of Iskitim. Berdsk and Akademgorodok.
The official site of the Trans-Siberian Art Festival www.transsiberianfestival.com