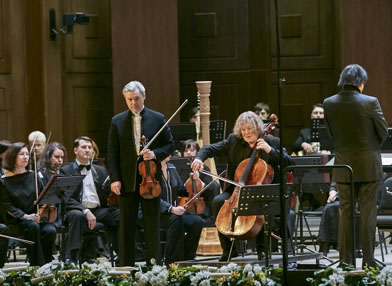 On April 5 the II Trans-Siberian Art Festival was closed by the concert of Novosibirsk Philharmonic Orchestra under the direction of Charles Dutoit with the soloists Vadim Repin and Alexander Knyazev. The Concerto for violin and cello by Brahms and Mahler’s Symphony №1 were performed.

Vadim Repin noted that in 2016 he plans to expand the directions of the program of chamber music and master classes for young musicians. It is known that in the next year the geography of the Trans-Siberian Art Festival will be even wider: some concerts will be held in Israel and Japan.

In the frames of the Festival the violin concert №3 De profundis by Lera Auerbach was premiered in Novosibirsk. The composer with international reputation, recognized as the most performed author of her generation, Lera Auerbach wrote this concert specifically for Trans-Siberian Art Festival commissioned by its artistic director Vadim Repin. Vadim Repin, Novosibirsk Philharmonic Orchestra and conductor Dmitry Yurowski became the first performers of the concert.

Alongside with the concert programs of different genres one could attend the premieres of documentaries by John Bridcut and Maria Kononova’s art exhibition. In total, more than 200 artists: conductors, composers, artists, directors and ensembles took part in the programs of the festival in Novosibirsk.