Stradivarius violin will play in Novosibirsk 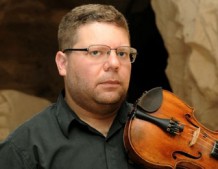 On 12, 13 and 14 May the violinist Ilya Konovalov will perform in Novosibirsk. The musician will arrive to the native city with the violin “Hercules”, created by legendary Italian master Antonio Stradivari in 1732.

Violin «Hercules», created by Antonio Stradivari in 1732, belonged to the famous Belgian violinist, conductor and composer Eugene Ysaye until 1895. In 1908 during a concert at the Mariinsky Theatre in St. Petersburg the instrument was kidnapped and was long considered lost. The violin was discovered in 1925 and since that time belonged to the chief conductor of Boston Symphony Orchestra Charles Munch until 1960, in 1962 it became the property of the violin virtuoso Henryk Szeryng. In 1972 the musician offered the violin to Jerusalem, in order to a concertmaster of Israel Philharmonic Orchestra plays on it. Since 1997 a concertmaster of Israel Philharmonic Orchestra is Ilya Konovalov.

Ilya Konovalov was born in Novosibirsk in a musical family. At the age of 7 he began studying with the legendary violin pedagogue Zakhar Bron, and continued his studies with Professor Alexey Gvozdev. Already at this time he won the All-Russian Competition and the International Henryk Wieniawski Violin Competition. Later he studied with Professor Dora Shwarzberg at Vienna Academy of Music.

Ilya Konovalov is a member of many prestigious festivals such as the Festival in Davos, «Schubertiades» in Germany, the Music Festival of Haifa and others. The musician recorded two CDs on the label «Melody» and Brahms's Violin Concerto with Novosibirsk Philharmonic Orchestra conducted by Arnold Kats. Since 1997 he is a concertmaster of Israel Philharmonic Orchestra under Zubin Mehta.

Ilya Konovalov is a first violin of Israel philharmonic string quartet, founded in 2006 by the idea of Zubin Mehta.

Since 2006 Ilya Konovalov has been teaching violin and chamber music at the Academy of Music at Tel Aviv University.