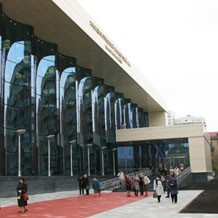 In the official part of the ceremony, the Governor of Novosibirsk region Vasily Yurchenko thanked the builders and contractors for their work and shared his impressions: «This object which was «born» very difficult is unique, indeed. The acoustics of the hall, the opportunities for musicians on the stage are at a very high level, and this is the opinion of experts, world stars. We're going to equip the hall with technical and lighting elements. In addition, behind the stage there is a space for organ. We understand that the organ in this hall is needed; all possibilities to put it here are provided».

On this solemn day Novosibirsk Philharmonic Orchestra under the direction of the pupil of Arnold Kats, conductor Mark Gorenstein and internationally acclaimed Novosibirsk violinist Ilya Konovalov performed in the new hall. The musicians played extracts form the Concerto for Violin and Orchestra by Brahms and the Symphony №2 by Scriabin.

«The Hall is great, with a great potential, there is a concert atmosphere here, and this is the most important thing,» – the violinist Ilya Konovalov said after his performance on the stage. In the near future four Philharmonic teams will move to the new building: Novosibirsk Philharmonic Orchestra, Vladimir Tolkachev Big Band, Orchestra of Russian folk instruments and Chamber Choir.

The official opening of the State Concert Hall named after Arnold Kats to the public is scheduled for September. The first concert will feature violinist Vadim Repin, conductor Vladimir Spivakov and Novosibirsk Philharmonic Orchestra. The governor also noted that in April 2014 there will be a festival of classical music, initiated by Vadim Repin, with participation of international stars.