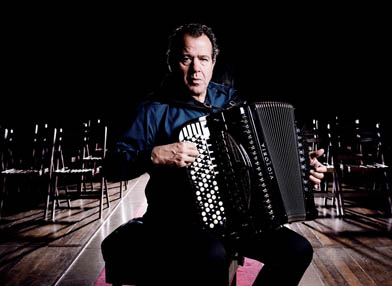 In the frames of the International music festival “Classics” held by Novosibirsk state philharmonics, there took place a concert of a legendary French accordion player Richard Galliano on 10 December.

Together with the chamber orchestra of Novosibirsk Philharmonics, the world music star performed an arrangement of the famous Vivaldi’s concerts “Four seasons” for accordion and string orchestra.
Novosibirsk became the first Russian cities in which one of the most popular compositions of the world music history was performed in arrangement for accordion. The concert took place at Arnold Kats state concert hall.
Chamber orchestra of Novosibirsk Philharmonics became Richard Galliano’s stage partner. The musician had collaborated with Novosibirsk collective many times already: in 2011 their concert was a part of the IX International Christmas festival or arts in Novosibirsk, in 2013 chamber orchestra and Richard Galliano performed at Mariinsky theatre concert venue in Saint-Petersburg. Principal conductor of the orchestra- Alim Shakhmametiev.