Philharmonic summed up the financial results of the year 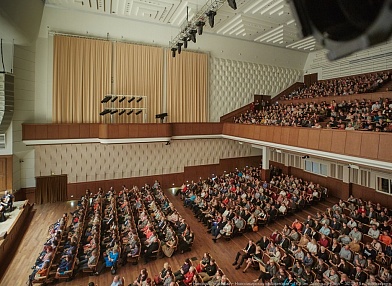 Philharmonic’s revenues in 2015 compared with 2014 year increased by 15.6%. Number of philharmonic concerts’ audience has increased by 16.8% in the past year and amounted to 401 016 people. During the year Arnold Kats State Concert Hall held 225 concerts, attended by 143 424 people, Philharmonic Chamber Hall held 279 concerts with 66 938 people respectively. Along with performances on Philharmonic’s own areas, its creative collectives gave concerts on the stage of Concert hall of the House of science SO RAN, Palaces of culture in Novosibirsk districts, middle schools of general education and all the districts of Novosibirsk Region.

“The past year was remembered by many, certainly not positive changes in social and economic life of the country. In this situation, the revenue’s increasing our organization has shown, seems even more significant, - commented Tatiana Lyudmilina, general director of Novosibirsk State Philharmonic Society. – The reason of the success is the high professional level of both creative collectives and administrative services, as well as intensification of activity. We make Philharmonic’s repertoire the most diverse, so that more music lovers, fans of various genres could find interesting events. Of course, we are talking about concerts, corresponding to the high artistic level, expected by philharmonic stage".

Over the past two years increasing of Philharmonic’s revenues amounted to 77.1%, the number of audience increased by 31%.

Tatiana Lyudmilina headed Novosibirsk Philharmonic from January 13th, 2014. Honored Worker of Culture, from 2001 to 2014 she was the Director of Novosibirsk Academic Youth Theatre “Globus”. Since 1995 Tatiana Lyudmilina is the organizer of the International Christmas Festival of Arts - the largest cultural forum over the Urals Mountains.

The plans of Novosibirsk Philharmonic for year 2016 are to hold several festival and anniversary projects, along with the planned concert activity.

On 29th of March Novosibirsk Philharmonic Orchestra celebrates its 60th anniversary with great concert with the participation of pianist Dmitry Masleev, the winner of the latest International Competition named after Tchaikovsky. In February the collective has a European tour. On 11th of March the Orchestra will for the first time perform at the stage of Concert Hall of Mariinsky Theatre (Saint-Petersburg). This concert will be held under the auspices of Trans-Siberian Art Festival and will be dedicated to the Orchestra anniversary. Both concerts will be conducted by Gintaras Rinkevicius, artistic director and chief conductor of Novosibirsk Philharmonic Orchestra.

Also before the end of the concert season Philharmonic will hold II All-Russian festival of orchestras and ensembles of folk instruments "Strings of Siberia", which from 10th to 12th of February will gather in Novosibirsk six orchestras of folk instruments. In March Philharmonic will held the evenings of contemporary music, "the Mart code". Along with Novosibirsk Philharmonic Orchestra the following collectives will celebrate their anniversaries in 2016 - Chamber Choir, Filarmonica-Quartet, The Early Music Ensemble “Insula Magica”.