Philharmonic announced the winners’ of the "Golden Key" Award names 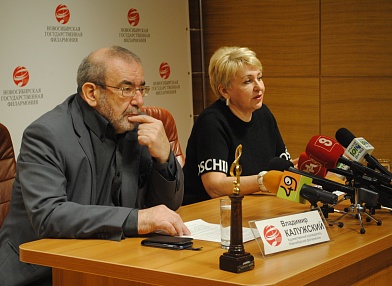 On 5th of February Novosibirsk Philharmonic will celebrate its 79 years. The presentation of Philharmonic Award "Golden Key" will be held this evening. It is traditionally awarded to persons who have made a contribution to the cultural development of Novosibirsk and glorified our city. The award dates back to 1998, and during the years of its existence more than 80 people became the winners of it.

"For almost 20 years we hand philharmonic award and one of the main principles of the list of its laureate’s formation - those are people who form the glory of our city, the culture, the Philharmonic itself by their creative labor” – says Vladimir Kaluzhsky, Artistic director of Novosibirsk Philharmonic.

As the General Director of Novosibirsk Philharmonic Tatiana Lyudmilina have mentioned – “in our pre- jubilee year the award organizing committee tried to mark the most distinguished figures”.

The winners of the award “Golden Key-2015” became: documentary filmmaker Vladimir Eisner “For merits in the field of documentary film”; lecturer-musicologist of Novosibirsk Philharmonic Marina Yakushevich “For the long-term cooperation with the Philharmonic Chamber Orchestra”;  Novosibirsk Museum’s Director Elena Shchukina “In connection with the preparation of the exhibition of the Arnold Katz Museum and co-operation with the Philharmonic on the project "90 years of Lenin's House”; Master of Novosibirsk Orchestra of Russian Folk Instruments Evgeni Denisov “For long-term work and in connection with a brilliant victory in the All-Russian competition of masters in Krasnoyarsk”; musician of The Early Music Ensemble “Insula Magica” Anna Nedospasova “For the set of merits and in connection with the jubilee of the collective”; artistic director of Folklore Enseble “Rozhdestvo” Olga Gurina “For merits in the study, preservation and promotion of folk art”

The award also will be handed to several journalists who actively support culture in their work. Their names will be announced at a ceremony on 5th of February.