Oratorio, written by an Orthodox priest, will be performed at the Festival of Russian Music «Pokrov Autumn» 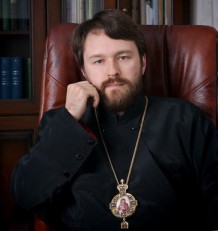 On 18 October Novosibirsk premiere of the oratorio «St. Matthew Passion» written by Metropolitan Hilarion will take place at Arnold Kats State Concert Hall. This composition created in 2006 received worldwide fame and became the basis for the film of Pavel Lungin “Conductor”. The oratorio will be the most significant event of the Festival of Russian Music «Pokrov Autumn.»

During 2007-2012 the oratorio was performed 48 times, in 14 cities of Russia, as well as in Moldova, Greece, Ukraine, Hungary, Australia, Canada, Macedonia, Serbia, Italy, Turkey, Estonia, Latvia, Lithuania, Switzerland and the USA.