Novosibirsk program of the VII Trans-Siberian Art Festival is over 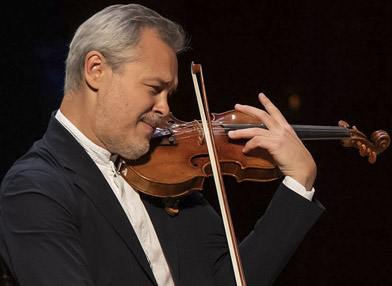 The VII-th Trans-Siberian Art Festival will go down in history as the most unusual one, which was held in an extraordinary way, despite all the circumstances. In November 2019 at the announcing press conference the organizers of the festival led by the world famous violinist Vadim Repin spoke about the festival program, which was supposed to last from March to April 2020. Instead of the traditional 3-4 weeks, the festival lasted until December and was held in two stages, the program underwent extensive changes, and some of the concerts were held online.

At the opening of the festival on March 21 the original program was changed, all events with the participation of foreign musicians were postponed to autumn. The spring session of the festival included 5 concerts, only one of which - "Pas de deux on the fingers and for the fingers" with the participation of the prima ballerina of the Bolshoi Theater Svetlana Zakharova - was held with the audience. The rest were organized in the format of live broadcasts on the Novosibirsk OTS channel, on the websites of Novosibirsk Philharmonic Society, Radio Orpheus and the international cultural project «Russian Seasons». The total audience of both live and recorded broadcasts exceeded 1.5 million people.

The autumn stage of the festival opened on September 20 with a world premiere. Novosibirsk Philharmonic Orchestra under the baton of conductor Valentin Uryupin performed for the first time "La Sindone" by Arvo Pärt for violin and orchestra. Soloist - the artistic director of the Trans-Siberian Art Festival Vadim Repin. The concert also included a performance of orchestral music by Ravel and Schumann. World famous musicians performed in the autumn concerts: violinist Clara-Jumi Kahn (Germany) and conductor Vincent de Court (Netherlands), Borodin quartet, pianist Nikolai Lugansky and cellist Alexander Ramm, alumni of the Bolshoi Theater Youth Opera Program, and pianist Ivan Rudin ... Great attention was drawn to the master classes of the leading musicians under the general name "School of Masters". The program in Novosibirsk ended with a concert by conductor Sasha Goetzel (Austria) and artists of the Bolshoi Theater with Novosibirsk Philharmonic Orchestra and a performance by Yuri Bashmet with the Moscow Soloists ensemble.