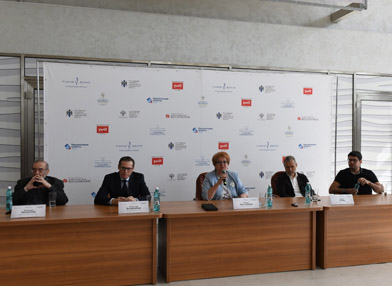 “The Trans-Siberian Art Festival has become the largest musical event in the Novosibirsk region in recent years. Today, September 14, the first concert will finally take place in the State Concert Hall named after A.M. Kats, and it will be held under the flag of Vadim Repin festival. All - both spectators and artists - were waiting for the moment of lifting the restrictions of Rospotrebnadzor. The Ministry of Culture of the Novosibirsk Region will try to ensure that the Trans-Siberian Art Festival expands its borders, since the region has a number of concert halls where it is also possible to hold events within the framework of this significant event,” said the head of the Ministry of Culture of the region Natalya Yaroslavtseva.

Artistic director of the Trans-Siberian Art Festival Vadim Repin spoke about plans for the near future, stressing that the announced concert programs of the Seventh edition of the Forum will take place. In some cases, the performers will be replaced - for example, on December 13 at the closing of the Festival the famous team of Yuri Bashmet will perform - however, the high artistic level will remain. “Our task, as a festival, is to make perform in Novosibirsk those musicians who would not be here without participation in the Forum's programs,” said Vadim Repin.

“Today is a special concert. Novosibirsk is again turning into an important place on the map of the cultural life of the world, as the world premiere of a work by Arvo Pärt, who celebrated his 85th birthday a few days ago, will be performed. It will remain in history that the first performance of the work took place in Novosibirsk, ”said Vadim Repin, artistic director of the Trans-Siberian Art Festival.

Director General of Novosibirsk Philharmonic Society Alexander Bocharnikov also noted the special significance of the upcoming concert: “The whole team of Novosibirsk Philharmonic Society has been waiting for today for a long time. And we are very pleased that we are opening the season with the performance of Vadim Repin and the program of the Trans-Siberian Art Festival.”

Alexander Bocharnikov emphasized that Novosibirsk Philharmonic Society will present not only the announced programs during the coming season, but will also give listeners the opportunity to attend those concerts that have been postponed from the last concert season.