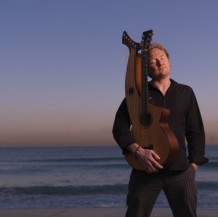 An open rehearsal for pupils of specialized English language schools took place at the philharmonic Chamber hall today. Participants of the event were harp-guitarist Jason Carter, vocalist Pepe Martinez, artistic director of the festival Dmitry Illarionov and the Chamber orchestra under the direction of Alim Shakhmametiev. The concert will take place on 14 April in the frames of the festival of guitar music “GuitART”-2012.

Young listeners asked their questions in English. They were interested whether the musicians studied in musical school, for how many years has Jason been playing the harp-guitar. Jason and Pepe answered and showed the instruments with great pleasure: a harp-guitar, a pocket trumpet, an accordina and even a saw which Pepe plays with a bow.

Today specially for the audience the musicians performed several works, in particular, the premiere of «Guten Morgen» (composition by Jason Carter) which will be first performed for wide audience tomorrow at the philharmonic Chamber Hall. And also with Dimitri Illarionov they performed a song «You shine», which caused the young audience appreciative applause.

“We have already had such experience in the philharmonics – that time we invited all interested persons from different schools to visit an open rehearsal”, — Aliona Bolkvadze, Deputy director of Novosibirsk philharmonic society for international projects comments. – There were many interested people, they were truly sincere and we were pleased by this fact. Then, for various reasons we have not realized anything like this. But today the festival of guitar music finally provides this opportunity — to arrange a meeting with native speakers, musicians from the UK and France, where the students of the specialized language schools could improve their spoken English, and at the same time join music.”

After the rehearsal the musicians answered personal questions and took pictures with all who wanted. The warm response among the participants makes hope that such format of meetings will become traditional for Novosibirsk Philharmonic society.