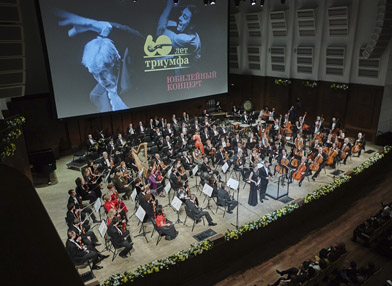 Yesterday Novosibirsk Philharmonic Orchestra celebrated its anniversary with a great festive concert "60 Years of Triumph". In the end Dmitri Masleev, laureate of the recent International Competition named after Tchaikovsky performed. The orchestra conducted by its artistic director and chief conductor Gintaras Rinkevicius performed works of the classical repertoire. In the end of the concert orchestra surprised the audience, performing the final part of Overture to the Opera “Wilhelm Tell” by Rossini not on the instruments, but as a choir a capella.

On 29th of March Novosibirsk Philharmonic Orchestra celebrated its anniversary with a great festive concert "60 Years of Triumph". The orchestra conducted by its artistic director and chief conductor Gintaras Rinkevicius performed with pianist Dmitri Masleev, winner of the recent International Competition named after Tchaikovsky.

Anniversary concert program included Overture-Fantasia “Romeo and Juliet" by Tchaikovsky, Concerto number 2 for piano and orchestra by Rachmaninov and also miniatures of Mozart, Wagner, Bizet, Rimsky-Korsakov and other composers.

The last number of the program was Overture to Rossini's "Wilhelm Tell", when in the final section musicians suddenly laid their instruments aside and started to sing – each their own party. The singing lasted for about two minutes, the maestro continued to conduct the orchestra.

"The idea of this event was offered by Gintaras Rinkevicius, - says Nikolay Sizikov, director of Novosibirsk Philharmonic Orchestra - the first time maestro implemented it with Vilnius Symphony Orchestra. Thus, the Orchestra in the jubilee evening showed the audience all the facets of its temperament and repertoire diversity - performing number-trick along with detailed symphonic works and miniatures of different styles".

Musical numbers in a concert alternated with the references from the history of Novosibirsk Philharmonic Orchestra by the host of Novosibirsk Philharmonics Natalia Ermakova and actor of Novosibirsk Academic Youth Theater "Globus" Maxim Guralevich. On the big screen, the audience were presented videos about the history of the orchestra, speeches of the founder of the collective Arnold Kats, recorded by the musicians during rehearsals. With a congratulatory word to the orchestra and the audience Tatiana Lyudmilina, general director of the Novosibirsk State Philharmonic Society asked. Orchestra standing welcomed collective’s veterans who presented in the hall, as well as its most loyal listeners attending concerts for decades.
In the foyer of the hall a special photo zone was organizes, a photo exhibition of the history of the orchestra was exhibited. The evening was prepared by stage director of Philharmonic Marina Muromtseva. Live broadcast of the anniversary concert on the philharmonic’s web-site watched 2,400 people, which is about twice the normal amount of spectators.

"As a result of the recently passed European countries tour I can say with confidence: the orchestra reached a serious level so that the collective was invited to perform at major European stages. The result of this trip was the new proposals from representatives of the major agencies - said Tatiana Lyudmilina, general director of the Novosibirsk State Philharmonic Society, - Being proud of the orchestra, we should not forget that the orchestra is not just successfully performed in Europe but carries a high social mission - promoting cultural image of the city and the region. This music is a bridge between the countries and peoples in the current difficult political situation".

TV channel "Culture" recorded concert “60 Years of Triumph” and TV version of the anniversary performance should appear on the federal television approximately in May. The potential audience of the channel is estimated at 110 million viewers.

Novosibirsk Philharmonic Orchestra was celebrated not only with the concert.

From 28th of March and until the end of the week in the "Radio Metro" broadcast at all Novosibirsk metro stations fragments of classic works by Novosibirsk Philharmonic Orchestra sound. The action was organized by Philharmonic in cooperation with Radio "City Wave" and is dedicated to the anniversary of the collective. The list includes works by Tchaikovsky, Grieg, Rossini, Smetana.

Orchestra’s history photo exhibition was opened on 28th of March at the Arnold Kats State Concert Hall. About half of the 63 frames, depicting events from the 1960s to the present time, were taken by Alexander Guryanov - musician of Novosibirsk Philharmonic Orchestra, concertmaster of the bassoons. The exhibition brings together shots from concerts, tours and collective’s everyday backstage life. The exposition will be presented during a month and will be available to all visitors of concerts in Arnold Kats State Concert Hall.

At a press conference held after the opening of the exhibition, Tatyana Lyudmilina, general director of the Novosibirsk Philharmonics, announced plans to renovate the first concert in the history of the collective in June.

"All the current concert season is dedicated to the orchestra’s anniversary. We started it with a kind of concert-reconstruction: there were compositions, which made up a program of our renowned collective’s first performance in 1956 - said Tatiana Lyudmilina - In June, we also want to hold a concert-reconstruction, but of a different kind. The orchestra will travel to the city Novoaltaysk of Altai Region. It was there in 1956, not yet in the city, but in the village Chesnokovka, the first concert of the orchestra. After 60 years we will perform there again".

On 28th of March a ceremonial meeting of orchestra collective was held, where all musicians were presented with letters of gratitude and certificates of appreciation of the authorities of all levels.

Two tours of orchestra in this concert season were also dedicated to its anniversary - in September the collective visited Italy with three concerts, in early March it has taken a grand tour through Spain, Germany and Austria, the final concert of the tour was held in St. Petersburg in concert hall of Mariinsky Theatre. 7 concerts included in the tour were attended by more than 10,000 listeners, including such prestigious halls as the Konzerthaus in Vienna.

In April Novosibirsk Philharmonic Orchestra once again will become one of the key heroes of Vadim Repin’s Trans-Siberian Art Festival, which will last from 9th to 24th of April and will gather leading world performers of classical music in Novosibirsk again.