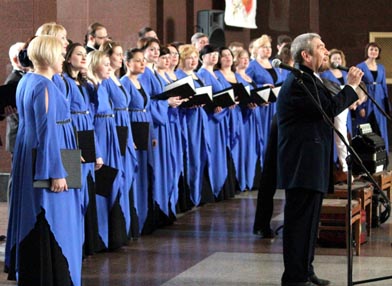 Novosibirsk Philharmonic Chamber Choir won in the category "adult groups" of All-Russian choral festival dedicated to the 70th anniversary of Victory in the Great Patriotic War. The final stage of the festival took place on May 6 at the Cultural Center of the Ministry of Defense in Moscow. On May 9 the participants of the final stage, including the Novosibirsk choir, performed at the open area in front of the Russian Army Theatre with the premiere of the song "Immortal regiment" accompanied by symphony orchestra.
All-Russian choral festival is the largest event in the field of choral art, which was attended by about 60 thousand people, more than 2 000 choirs, including professional and amateur choirs of different age categories. The festival is organized by the All-Russian choral society and is supported by the Ministry of Culture of Russian Federation.