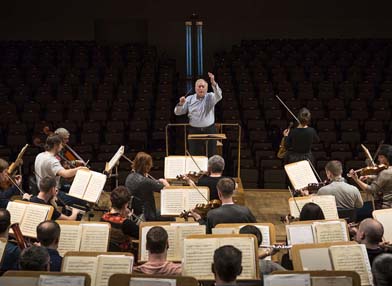 On 7th of March Novosibirsk philharmonic orchestra completed a European part of its large tour with the concert in the hall of the Konzerthaus in Vienna. The performance on one of the most prestigious concert halls of the world was completely sold out and gathered 1800 listeners. During the tour performances of the Novosibirsk philharmonic orchestra were attended by over 9,000 European listeners. The tour is dedicated to the 60th anniversary of the collective. It will end on 11th of March with the performance in the concert hall of Mariinsky Theatre.

"We can say with confidence that this tour was extremely successful: the orchestra obeyed very important areas - not only Vienna but also Düsseldorf, and Madrid. Public interest was very high - throughout the tour halls were filled to 100%, or were close to it, and, of course, everywhere we were met with a very warm welcome, after each concert the audience demanded an encore, - says Nikolay Sizikov, director of Novosibirsk philharmonic Orchestra . - In Vienna, the audience applauded long and hard - Maestro Sanderling bow out four times, but decided not to perform the encore - the weariness after a week concert marathon".

On 11th of March Novosibirsk philharmonic orchestra will complete the tour with performance in the concert hall of Mariinsky Theatre in St. Petersburg. The concert will be held under the auspices of the Trans-Siberian Art Festival and will become kind of a prelude to Vadim Repin’s international forum, which will be held in April and Novosibirsk will be the center of it for the third year. In St. Petersburg, along with the orchestra, violinist, student of Zakhar Bron Mone Hattori will perform, known to the audience of last year Trans-Siberian Art Festival. Novosibirsk philharmonic orchestra will be conducted by Gintaras Rinkevicius - artistic director and chief conductor of the collective. In the program there are Overture to the opera "Oberon" by Weber, Concerto for Violin and Orchestra № 1 by Wieniawski and Tchaikovsky’s Symphony № 4.

The highlight of the season for Novosibirsk philharmonic orchestra will be a big anniversary concert "60 Years of Triumph", which will be held on March 29th in Arnold Kats State Concert Hall. The concert will be conducted by Gintaras Rinkevicius, pianist Dmitry Masleev, winner of the XV International Competition named after Tchaikovsky (2015) will perform as a soloist.

In April Novosibirsk Philharmonic Orchestra will once again become the basic collective of Vadim Repin’s Trans-Siberian Art Festival. The project will be held in Novosibirsk for the third time already and last from 9th to 24th of April.