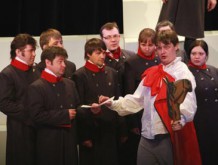 On 27 March the first jubilee project of Novosibirsk state philharmonic society «М-ART CODE» is over. The series of 8 concerts of modern music lasted about one month and united the music of ХХ and XXI centuries of different directions and composers’ schools.

A new and unusual, as it often happens, attracted a whole range of emotions, from bewilderment to delight. Perhaps not all the compositions sounded in these March evenings will leave a bright mark in history of music, but today they give us a face of actual musical culture.

«M-ART CODE» ended in the World Theatre Day. And it is no coincidence. Its apotheosis was unusual for the Philharmonic stage – opera-fantasia by Andrey Krotov «There was no day, neither date.» Under the conductor Igor Tjuvaev, directed by Sergei Chernykh, and artistic director of the Philharmonic Society Vladimir Kaluzhsky, the Ensemble «Markell’s voices» and the philharmonic Variety orchestra put the opera of Novosibirsk composer into life. Based on Gogol's «Diary of a Madman» it is written today with modern and at the same time already familiar to the listeners musical language, emphasizing the indisputable actuality of the great Russian writer.

In the relatively small space of the Chamber Hall stage, nearly one-third occupied by musicians, they miraculously managed to recreate the Department of the XIX century, streets of St. Petersburg, distant Spain, a chamber of a mental hospital… Minimum scenery, maximum psychological. Polished movements of characters around the protagonist underlined his confusion and inevitability approaching madness, and seemed to move forward the opera action. The protagonist himself was out of time… In the opera he was performed by Vasily Novikov who was awarded with standing ovation in the final.

The opera finished and, possibly, many questions remained: to the director, to the performers, to the principal hero and, at last, to ourselves…

In the meantime, these questions could be asked a few days earlier, on 22 March, at the meeting in the literary shop «Capital». It was organized for regular listeners and all interested. In the comfort of live communication Andrey Krotov, Vladimir Kaluzhsky and Igor Tjuvaev talked about the history of opera, the concept of staging, and even showed fragments of the rehearsal process. For Novosibirsk Philharmonics there was the first experience with «Capital». We thank the hospitable hosts for their help in organizing of the meeting and plan to continue such meetings in future.