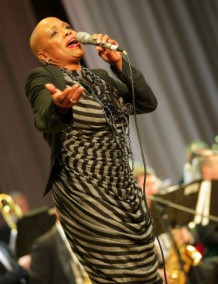 The International jazz festival SibJazzFest-2011 took place in Novosibirsk from 20 to 22 October. Restored by Novosibirsk philharmonic society the forum is hold under a new name and in a new form and gathers the stars of world jazz and Novosibirsk collectives on one stage.

This year the world jazz legend, holder of 3 Grammies (the last was awarded to her in 2011), Dee Dee Bridgewater arrived to Novosibirsk. The singer appeared on the stage together with Vladimir Tolkachev Big Band whose level was highly appreciated the star.

Concerts took place on the stage of the Palace of culture of Railway workers and in the club “Integral”. The festival was closed by traditional jam-session at the club «Izum». Alexander Nazimko, the director of Novosibirsk philharmonic society noted that the previous festival was too “American” and this year the organizers wanted to present European jazz stage.

«While composing the program we were also guided by our personal relationships – Mr. Nazimko said — For example, a visit to Novosibirsk of the World Saxophone Quartet became possible due to our acquaintance with the band member Oliver Lake, whom we met a year ago; Antti Sarpila knows well the musicians of the Siberian Dixieland, in summer they performed together at the festival in Pori and, of course, it also contributed to the visit of the Finnish musician to Novosibirsk.»

Kirill Moshkov, chief editor of the only specialized journal in Russia Jazz.ru, highly appreciated the level of SibJazzFest: «This festival was significantly stronger than the previous one. The previous was also great, but the participants were quite dissimilar, we were fortunate that they finally formed noncontradictory unity, — the expert said – The present SibJazzFest is a festival of European level. What we hear today in Novosibirsk is a topical jazz, one that is played at the largest European festivals. I traveled this summer four major European festival — in Norway, Italy, Estonia: there they play music of this level and format. The musicians most in demand move from one festival stage to another, and thus there is such a thing as the festival circuit — the festival circle. It's great that Novosibirsk becomes a part of this circle, not all of Moscow festivals can boast about it.”

«Your Festival is perhaps the only in the country, where a star of foreign jazz appears in each set. There are some festivals closed in this sense «Petrojazz» in St. Petersburg or «Jazz in the Hermitage Garden» in Moscow, but maximum concentration of foreign stars is not a system there, but SibJazzFest organizers are trying to put it to a system. It is important that the level is taken, that it is kept and, of course, it is important to stay», — said Kirill Moshkov.

The next international festival SibJazzFest is scheduled for autumn 2012.