In the State Concert Hall named after A.M. Kats a press conference devoted to the opening of the 83rd concert season took place 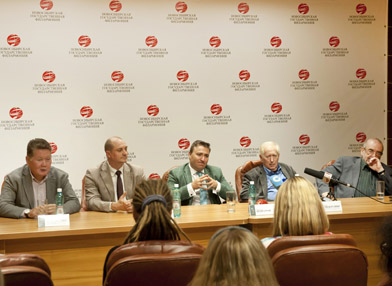 The new concert season will begin with a dedication to Maestro Arnold Kats. The series of concerts dedicated to the 95th birthday of the founder of Novosibirsk Philharmonic Orchestra is a kind of offering to the Great Master, a touching gesture of his colleagues, who, together with the conductor, appeared on the same stage.

The cycle includes seven concerts, the first of which is marked by the participation of the titled soloist and conductor Maxim Vengerov. “I am always pleased to be here in my homeland, a great event for me to perform for my native audience! A meeting with the Novosibirsk Philharmonic Orchestra is always amazing, every minute of communication with musicians is a celebration!” - said Maxim Vengerov.

“We enjoyed the rehearsal with our wonderful soloist Maxim Vengerov! We are trying to attract famous soloists and conductors to participate in the Season of Novosibirsk Philharmonic Orchestra. And the way the audience trusts us shows how well we manage to do this!”- said Thomas Sanderling.

The Deputy Minister of Culture of Novosibirsk Region Yevgeny Sazonov thanked Maxim Vengerov and Thomas Sanderling for the upcoming significant concert. “We are very pleased that people who are directly related to the history of modern academic musical culture come to pay tribute to the memory of Maestro Arnold Kats,” said Yevgeny Sazonov.

The General Director of the Philharmonic Society Beibit Mukhamedin joined the opinion of previous speakers on the significance of the series of concerts dedicated to the memory of Arnold Kats. “The name of Arnold Mikhailovich is sacred for us!”, he said, “This opening of the season sets a very high level! But we can safely say that we are starting it in full force and with great creative plans.”

The Artistic Director Vladimir Kaluzhsky told about creative plans for the upcoming season. He especially singled out a musical and literary subscription with the participation of Novosibirsk Philharmonic Orchestra “Traits to Portrait”: in the 83rd concert season it will be devoted to Johann Goethe. In addition, the federal project of the Virtual Concert Hall is being prepared for opening, which will allow music lovers of Novosibirsk to attend broadcasts of concerts from the best concert halls in the world.
A significant thematic focus of the upcoming concert season will be the dedication to the 250th anniversary of Ludwig van Beethoven. The memorable date will be marked by a number of concerts with the music of the great composer.