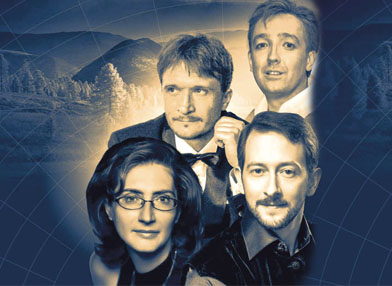 On 10th of April concert of "Faces of Shakespeare" will be held at the Philharmonic Chamber Hall. The program will combine artistic expression with sounds of organ, oboe and countertenor - a unique, highest male voice. Music and drama project is included in the program of Vadim Repin’s Trans-Siberian Art Festival.

On 10th April at the Philharmonic Chamber Hall in a unique concert performance " Shakespeare’s Faces" sonnets and monologues from plays of the greatest genius will feature. An essential part of the composition will be the musical compositions - both created in the age of Shakespeare and composed today, inspired by the works of the writer. Among the authors of music are Handel, Dowland, Purcell, Elgar, Britten, Rota.

"Shakespeare, his habits, character, are scattered in "Hamlet”, "Romeo and Juliet "," The Tempest ", sonnets ... Dramatist’s heroes – they are him himself, in all the variety of human virtues and shortcomings, - says the project participant, organist Eevgeniya Krivitskaya - The purpose of the musical-poetic composition is to recreate the "Faces of Shakespeare" - a passionate lover, reflective rigorist, a wise philosopher".

In the program famous musicians from Moscow and St. Petersburg will come to the stage. The owner of a unique voice Sergei Vanin - winner of numerous international competitions, Eevgeniya Krivitskaya - organist, teacher and professor at Moscow Conservatory. Oboist Ivan Paisov is known as the "Russian Paganini of Oboe", he is the soloist of the Bolshoi Theatre Orchestra, winner of international competitions. Musician's talent is highly appreciated in the West, as evidenced by his solo CDs, released by the prestigious Naxos. Petr Tataritsky is an actor, director, master of sounding words, a permanent member of numerous prestigious international music festivals.

Concert "Shakespeare Faces" will be the first in the history of Trans-Siberian Art Festival musical-dramatic project. Presentation of