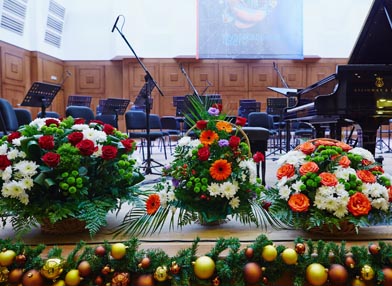 From 1 to 11 December the XI International Christmas Festival of Arts will take place in Novosibirsk. One of the largest cultural forums beyond the Urals will present to the audience 17 projects with participation of Russian and foreign stars of musical and theater art. For the first time a key organizer of the Biennale is Novosibirsk State Philharmonic Society.

The program of the XI International Christmas Festival of Arts will combine instrumental classical music and opera singing, jazz and blues, old Russian spiritual and chamber music as well as drama, mime, tap-dance and projects on the edge of arts - music and graphics, music and word, music and drama.

The festival will open on December 1 at Arnold Kats State Concert Hall with the concert of Irish pianist Barry Douglas and the Philharmonic Chamber Orchestra conducted by Michel Tilkin (Belgium), and will be closed on December 11 with the performance of the brilliant soprano Hibla Gerzmava and Novosibirsk Philharmonic Orchestra under principal guest conductor Fabio Mastrangelo.

The tickets for the festival concerts are available from September 1 at the ticket offices and on the philharmonic website.

The International Christmas Festival of Arts was held for the first time in December 1995 on the initiative of Novosibirsk Academic Youth Theater "Globe". Since then, the Cultural Forum takes place once in two years, representing in Novosibirsk the most notable art projects. The extensive program, including a variety of arts: drama, music, dance, painting became the basis of the festival. The Christmas forum strengthened its international status and found permanent participants and followers in different countries.

The festival will open on December 1 at Arnold Kats State Concert Hall with the concert of the Philharmonic Chamber Orchestra conducted by Belgian conductor Michel Tilkin, soloist - the world-famous pianist, winner of the International Tchaikovsky Competition Barry Douglas (Ireland). The Festival will end on December 11 with the concert of the Philharmonic Orchestra with the "golden soprano of Russia", the soloist of Moscow Academic Music Theatre named after Stanislavsky and Nemirovich-Danchenko - Hibla Gerzmava. Conductor - Fabio Mastrangelo, principal guest conductor of the orchestra.

Hibla Gerzmava will also appear at Novosibirsk stage on 9 December. With Daniil Kramer jazz trio they will present the program "Opera. Jazz. Blues." Combining incompatible the musicians work wonders, offering jazz interpretations of music by Handel, Mozart and Puccini and demonstrating the combination of classic style of performance, and free jazz improvisation.

One of the highlights of the festival program will be the performance of the ensemble of ancient Russian sacred music "Sirin" (Moscow) on 10 December. The ensemble was found in 1989 by the largest specialist in the field of ancient Russian music Andrei Kotov, and in less than 30 years of existence entered the history of music: the greatest composers of the time wrote for them.

On December 6 Tomsk academic symphony orchestra conducted by its artistic director Yaroslav Tkalenko will present the musical program for children, devoted to the composer story-teller Rimsky-Korsakov. Soloist – young pianist, laureate of prestigious international contests Dania Khaibullina. The concert will take place at the Palace of Scientists of Academgorodok.

A distinctive feature of the festival program is the collaboration of guest stars and collectives of Novosibirsk Philharmonic Society. On December 5 the Philharmonic Chamber Orchestra under its principal conductor Alim Shakhmametev will present the musical-literary composition "Antoine de Saint Exupery. Little prince". Star of the program - Anatoly Bely, Honored Artist of Russia, actor of Chekhov Moscow Art Theater.

On December 8 the program "Step & Band" will present an unusual combination of tap dance and jazz with participation of Vladimir Tolkachev Big Band and dancers from the Netherlands Marieke van der Ven and Alexander van Goethem.

On December 10 the string quartet Filarmonica and pianist Alexander Palei (USA) will perform the program of the chamber music.

The largest event in the series of theater projects of the festival will be the performance "Five Evenings" of the Moscow Theater "Sovremennik", director Alexander Ogarev, on the stage of Novosibirsk Academic Youth Theater "Globe" - on 2 and 3 December. The main roles - People's Artists of Russia Sergey Garmash and Evgenia Simonova.

On December 3 the musical drama performance "Tenderness", director Roman Viktyuk, will be presented by the actress and famous TV presenter Sati Spivakova and the pianist, laureate of international competitions and the producer of the musical and literary compositions Basinia Shulman.

On December 4 the project Triptych "Time. City. Muse." will present the combination of words and music. The word here is poetry of "three poets-prophets of the twentieth century" Ossip Mandelstam, Boris Pasternak and Joseph Brodsky interpreted by the actor of Chekhov Moscow Art Theater Anatoly Bely. Music - actual sound from multi-instrumentalist and composer Daniil Kalashnik.

The most famous from the living mimes Adam Darius (USA - Finland) will appear on the stage of the Philharmonic Chamber Hall on December 7 in the play "Basho: a windswept spirit". In an unusual mime show based on Japanese poetry, the 85-year-old actor (and also a choreographer, dancer and writer) will perform the role of the great Japanese poet’s Soul. Kazimir Kolesnik (United Kingdom - Finland) will play Matsuo Basho wandering on the road and on the way to poetic mastery.

German project “New Anatomy” will present synthesis of contemporary improvisatory music and poetry. Its ideologist - bassist, composer and leader of the jazz band Phosphoros Meinrad Kneer united into one the poetry of Russian avant-gardists Daniil Kharms and Velimir Khlebnikov and German "poet and esthete" Christian Morgenstern and the sound of contemporary free improvisation. With the participation of the elocutionist, gifted musical German actor Uli Plessman.One of the most ambitious programs of the festival will be presented on December 2 in the Chamber Hall of the Philharmonic.