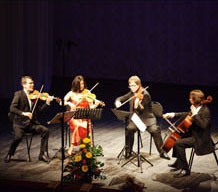 From 14 to 21 February Filarmonica quartet realized its tour to Germany. Five concerts, sold-out. The quartet offered to the lovers of chamber music compositions by Mozart, Schubert and Haydn. The culmination was the performance of the quartet at the opening of a new concert hall in Kassel. Money from this charity concert will be directed to the purchase of a grand piano for the new hall.

«It is a great honor for us — to open a new hall and also to participate in a charity concert. Everyone who arrived this evening could donate money for a purchase of a new grand piano for the hall named after Elisabeth Selbert. The officials of the Committee on Culture of the regional administration assisted at our concert as well as the organizers of Kassel Music Festival where we look forward to participate in future,»- Valery Karchagin, artistic director of the quartet Filarmonica, says.

German tour became traditional for the quartet Filarmonica. In 1995 the musicians visited Germany for the first time, and since have already performed more than 50 concerts in this country, including the ones in the frames of the international festivals. Each year musicians are invited to various German cities and explore new venues.