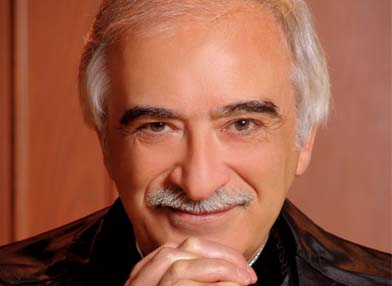 On 16th of April in the framework of Trans-Siberian Art Festival Extraordinary and Plenipotentiary Ambassador of Azerbaijan in Russia, famous soviet singer and composer Polad Bülbüloğlu will perform at the concert “Children to Children”. This same concert his 14-year-old son Murtuza will perform as a conductor.

On 16th of April concert “Children to Children” will take place in Arnold Kats State Concert Hall. “Son of Polad Bülbüloğlu – Murtuza – will take part in this concert. He’s 14 years old and he’s quite good at conducting. We invited him to take part in this concert, so that he could conduct few compositions, - says Vadim Repin. – When his father heard about that, he decided to come and support his son. He promised to sing some compositions, mentioned, he’d come with “a present”.

Polad Bülbüloğlu is a singer and composer who has created a whole new trend in the Soviet stage, connecting the modern rhythms with the national Azerbaijani melodic. He is the author of symphonic and chamber works, as well as musicals and music for theater and cinema. His songs got into the repertoire of Muslim Magomayev, Lev Leshchenko, Lyudmila Senchina, Roxana Babayan and others. Since 2006 Polad Bülbüloğlu is the Extraordinary and Plenipotentiary Ambassador of Azerbaijan Republic in the Russian Federation.

On the same stage with the legendary singer young talented musicians will perform: Israeli cellist Danielle Acta and the students of Novosibirsk Specialized Music School Julia Belan (piano) and Olesya Skorokhod (violin). Together with them on stage there’s Novosibirsk Youth Symphony Orchestra of Novosibirsk Specialized Music School - native school Vadim Repin. The head of the team is Vladislav Yankovsky, Honored Artist of Russia.

Vadim Repin has repeatedly stressed that "children" direction of the program of Trans-Siberian Art Festival is extremely important to him. Concerts "Children to children", where young musicians come to the stage to perform in front of their peers, are an essential part of the festival since its first year. Last year, this trend has increased by master classes, which were carried out for young talented musicians by the participants of festival’s concert program - the stars of the world music scene.

Tickets for the concert "Children to children" are the most affordable in the program of Trans-Siberian Art-Festival, they cost  500 rubles. Tickets are available at the ticket offices and on the Philharmonic website for purchase online.

Trans-Siberian Art Festival will take place in Novosibirsk from 9th to 24th of April. The artistic director of the Forum is the star of the world of classical music, a native of Novosibirsk, violinist Vadim Repin. In 2016, the festival for the first time the will expand its geography beyond Russia. Domestically, along with concerts held in Novosibirsk, there are concerts in Moscow, Yekaterinburg, Krasnoyarsk, Omsk.