Children&#39;s theatre «World of Music» will celebrate its 20th anniversary of the premiere of the musical play «Nightingale» 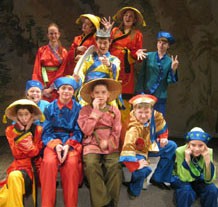 On April 14 the premiere of the musical play «Nightingale» will be performed on the Philharmonic stage. With this event the children's theater «World of Music» will celebrate its 20th anniversary. All parties will be sung by the children — students of the theater. Libretto on the fairy tale by Hans Christian Andersen was created by Vladimir Kaluzhsky, music by Andrey Krotov.

«Especially for the show we made the costumes and sets, works of Chinese poets and music by Chinese composer Zyao Si were used in the text. We carry out this project with the support of the Ministry of Culture of Novosibirsk region», — said the artistic director of Novosibirsk Philharmonic Society Vladimir Kaluzhsky.

Children's theater «World of Music» was created 20 years ago. The theatre combined theory and practice, general art education and regular appearances before the wide audience. Performances of the students of the theater «World of Music» have been shown not only in Novosibirsk but also in the cities of Novosibirsk Region, Russian cities and abroad. In the theater several shows were staged. They were created especially for the «World Music» by Vladimir Kaluzhsky and Andrey Krotov: «Elephant», «Opera for naughty children», "Ship «Gamma»”, «The Ark».

The book by Vladimir Kaluzhsky «In our theater» appeared to the anniversary date: where collected poems and songs from the performances of different years.