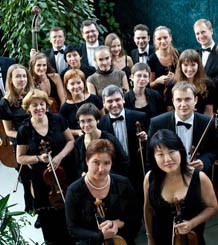 Novosibirsk Philharmonic Chamber Orchestra traveled to St. Petersburg, where it will take part in two prestigious projects. On 13 March the Orchestra will perform at the concert in memoriam of the composer Boris Tishchenko, on 15 March the Orchestra will give a concert with the famous French accordionist and bandoneonist Richard Galliano at the Concert Hall of the Mariinsky Theatre. The performance will take place in the frames of the festival «Pancake Week» organized by the Mariinsky Theatre.

On 13 March Novosibirsk Philharmonic Chamber Orchestra will participate in the concert in memoriam of Boris Tishchenko — composer, student of Dmitri Shostakovich. «There will be the first time in the 150-year history of St. Petersburg Conservatory, where non-conservatory and even non-Petersburg orchestra performs the compositions of its professor, — Alim Shakhmametiev, chief conductor of Novosibirsk Philharmonic Chamber Orchestra said, — Performance of the orchestra from another city at the author’s concert of Petersburg composer is an event of extraordinary rarity.» This evening the harpist, composer's widow Irina Donskaya, Nicolay Mazhara (piano) and Chingis Osmanov (violin) will appear on the stage together with the orchestra from Novosibirsk.

On 15 March the Chamber Orchestra will perform at one of the best stages of the world — in the Concert Hall of the Mariinsky Theatre. The concert of the orchestra with the legendary French musician Richard Galliano will take place in the fames of the festival «Pancake Week» which is organized by the Mariinsky Theatre for the ninth time. «Richard Galliano has already collaborated with us, so he was pleased to accept our offer to play together in St. Petersburg, — Alim Shakhmametiev said, — Both concerts in St. Petersburg are important for us — they are evidence of the fact that the orchestra has reached a level of fame when it is invited to perform in the very prestigious venues.»

The concert in memoriam of Boris Tishchenko will be recorded and broadcasted on the federal TV channel «Culture». The concert with Richard Galliano will be broadcast online on the site Mariinsky.TV.

Nearest concerts of the Chamber Orchestra in Novosibirsk will take place on 20 and 21 March: on the stage of the Palace of Science of Academgorodok and the Chamber Philharmonic Hall. The orchestra will perform with the harpist Irina Donskaya (St. Petersburg).

In the end of January – beginning of February the Chamber Orchestra made a big tour to the cities of Switzerland, Belgium and Italy. In May the orchestra will celebrate its 20th anniversary, all events of the concert season are devoted to the jubilee.