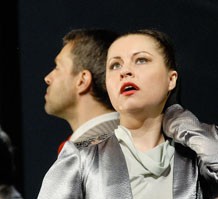 On 23, 24, 26 and 27 April in Novosibirsk Verdi's Requiem will be performed. Execution of this large-scale work is dedicated to the 200th anniversary of the composer. Under the direction of Gintaras Rinkevicius, chief conductor and artistic director of Novosibirsk Philharmonic orchestra, about 150 persons will perform — Novosibirsk groups, soloists of Vilnius and Novosibirsk opera theatres.

«The tremendous musical marathon that we are realizing these days is naturally included in the event of global scale: this year the whole music world celebrates the 200th anniversary of great Verdi – the artistic director of Novosibirsk Philharmonic Society Vladimir Kaluzhsky said, — Requiem is the only significant work created by Verdi not in the opera genre, but naturally reflecting the opera nature of his talent. The first performance of the Requiem on 22 May 1874 was conducted by the composer himself ».