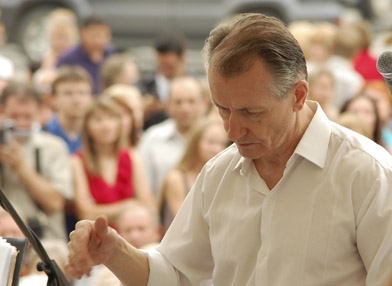 Was born in 1951 in Serov, Sverdlovsk region.

In 1971 graduated from the Sverdlovsk Music School named after P.I. Tchaikovsky by bayan and saxophone.

From 1971 served for army, musical department.

After graduating (1981) from the Novosibirsk State Conservatoire named after M.I. Glinka (saxophone) he has been working as a teacher and than as a professor of the chair of wind instruments of this musical institution.

Together with his pedagogical activity he performed concerts in the duo HOMO LIBER at the jazz festivals, made many recordings on the radio (Novosibirsk). English firm Leo Records edited the record by «Homo Liber» duo, which entered ten best albums of the firm of 80th.

V. Tolkachev also performs as a soloist-saxophonist at the european forums of free jazz together with such jazz authorities as Paul Blay and Merlin Crispl (USA), Iven Parker (England), Han Bennink and Mark Dresser (Holland), Vladimir Tchekasin (Lithuania) and others.

In 1985 created a jazz orchestra, whose artistic director and conductor is still being. In 1993 Vladimir Tolkachev Big Band received the status of professional ensemble, and in 1994 entered the Novosibirsk State Philharmonic Society.

V. Tolkachev is the Laureate of the philharmonic prize «Golden Key» (2000).

In 2002 he received a rank the «Honoured Artist of Russia».