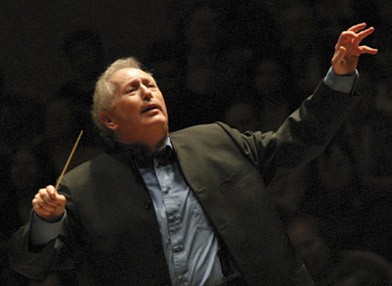 …a new conductor from Berlin gave us a Mozart full of mysteries…Astonishing!

He grew up in St Petersburg, where his father, the celebrated conductor Kurt Sanderling, was permanent conductor of the St Petersburg Philharmonic Orchestra. He graduated from the Music School of the Leningrad Conservatory and went on to study conducting at the Hochschule für Musik in East Berlin, becoming Music Director of the Halle Opera at 24 years old. By his mid-twenties he was conducting in all East Germany's principal orchestras and opera houses, including the Dresden Staatskapelle and the Leipzig Gewandhaus and won the Berlin Critic's Prize for his opera performances at the Komische Oper Berlin. His CD of Shostakovich's Michelangelo Suite (premiere recording) directly lead to his becoming assistant to both Herbert von Karajan and Leonard Bernstein. In the early 1980s he became permanent guest conductor of the Deutsche Staatsoper Unter Den Linden, which led to his successful debut at the Wiener Staatsoper, conducting Die Zauberflöte. Immediately afterwards the Wiener Staatsoper invited him to conduct Le Nozze di Figaro - the first performance after the death of the great Karl Böhm. He has won many prizes and a competition and is particularly renowned for the German, Russian and French orchestral repertory.

Shostakovich Premieres he has conducted:
He has enjoyed a close relationship with Shostakovich and his family for many years and still works in close collaboration with Irina Shostakovich. He originally met Dmitri Shostakovich whilst making his Moscow debut, conducting the State Orchestra of Russia, on the invitation of Evgeny Svetlanov, as a result of winning a conducting competition in East Germany. Greatly impressed, Shostakovich entrusted him with the translation into German of the texts of the 13th and 14th Symphonies and he conducted the German premieres of both works. He also conducted the world premiere recording of the Michelangelo Suite followed by a concert of the premiere of two British song cycles for which he was responsible for setting the original English text: Six Romances on Verses of British Poets and Anglo-American folk Songs, with the Symphony Orchestra of the Bavarian Radio in Munich, both recorded live and to be released on the Orfeo Label in 2012. At the instigation of Irina Shostakovich he made an Italian original version of the Michelangelo Suite, which is dedicated to her.

Shostakovich Premiers he has recorded:
(Deutsche Grammophon)
Two CD recordings for Deutsche Grammophon with Shostakovich Premieres, which became The Editor's Choice in the September 2006 issue of the Gramophone in London
Original Suite from Lady Macbeth of Mtsensk
Eight Waltzes
(Orchestration Boris Tishchenko)
Verses of Captain Lebyadkin Op. 146
Satires (Pictures of the Past) Op. 100
Five Romances on Words from Krokodil Magazine Op. 121
(Orchestration Leonid Dessyatnikov)
Preface to the Complete Edition of My Works, Op. 123
Sergei Leiferkus and the Russian Philharmonic Orchestra

Recently:
The Russian premiere of Leonard Bernstein's Symphony No. 3 (Kaddish) at the Grand Festival of the Russian National Orchestra in Moscow on 11th September 2011,


Future plans include among others,

Concerts with the Staatskapelle Dresden,

with the National State Philharmonic in Budapest,

the Radio Philharmonish at the Concertgebouw Amsterdam,

a concert tour wit the Brno Philharmonic Orchestra to China,

In August 2017 starting as Artistic Director and Chief Conductor at the Novosibirsk Philharmonic Orchestra .  With them tours in Europe/

He just received for his last CD with the London Symphony Orchestra the ECHO Klassik Prize, the highest European Award ( one of the few most important)