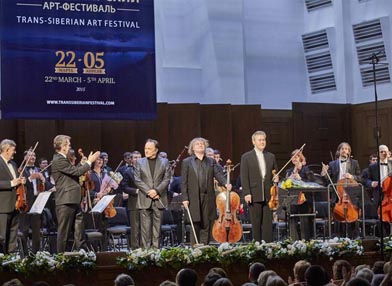 In every festival there is something special. The anniversary festival is marked by two compositions by Sofia Gubaidulina, recognized throughout the cultural community as one of the most brilliant composers of the second half of the 20th century. This is the "Horseman on a White Horse" for a large symphonic orchestra and organ - the work is dedicated to Valery Gergiev, and Concerto for Violin and Orchestra "Dialogue: I and You" (world premiere), which was written literally during the festival. The concert is dedicated to Vadim Repin and conductor Andres Mustonen.

Completion of the Fifth Trans-Siberian Art Festival for our orchestra was a concert on April 13th in the 64th subscription of Mariinsky Theater. The program included an introduction to the opera "The Master-Singers of Nurnberg" by Wagner, Concerto for cello and orchestra by Schumann and Rachmaninov's Second Symphony. Soloist was Alexander Buzlov, conductor - Thomas Sanderling.

This was the second performance of the orchestra in the Concert Hall of Mariinsky Theater. The third Trans-Siberian Art-festival was finished in the spring of 2016 the same way.

The sixth Trans-Siberian Art Festival was held in Novosibirsk from March 21 to April 13, 2019. Novosibirsk Philharmonic Orchestra opened the Festival with its artistic director and principal conductor, maestro Thomas Sanderling. The orchestra played 6 concerts and presented world premieres of works by Boris Lisitsin (Symphonic Fantasy “Music of the Sea”, dedicated to Arnold Kats) and Alexander Raskatov, who dedicated his Violin Concerto to Vadim Repin.

The orchestra was conducted by Tugan Sokhiev, Andres Mustonen, Dmitry Sitkovetsky, who also performed as a violinist, outstanding conductors of our time Jan Pascal Tortelier and Charles Dutoit who conducted the concert-closing.

The soloists in the festival programs were pianists Sergey Tarasov, Denis Kozhukhin, cellist Antonio Meneses and, of course, Vadim Repin. One might say that this time he did not let the violin out of his hands, and caused a storm of emotions in the audience with his every appearance on the stage of Arnold Kats State Concert Hall.

And as Vadim Repin said back in September 2013 – “this entire splendor rests on a solid foundation - Novosibirsk Philharmonic Orchestra”.

Since 2014 the Trans-Siberian Art Festival has already been held 6 times, traditionally in spring

«I want to emphasize that the idea of the upcoming Trans-Siberian Art Festival, its point of support - is our great symphony orchestra, which despite all the difficulties - the loss of the legendary (without exaggeration of this word) musician Arnold Kats - is in great shape, splendidly plays concerts. I hope that for the orchestra the festival will also be joyous event».

«It is hardly possible to overestimate today event - the opening of Arnold Kats State Concert Hall. It is a remarkable gift to Novosibirsk, a gift to Novosibirsk Philharmonic Orchestra, which over the years, unfortunately, was forced to work in deplorable conditions. So, it is a great joy for the orchestra and a gift to the whole city».

«One of the whales of the Trans-Siberian Art Festival is Arnold Kats State Concert Hall. Second one is Novosibirsk Philharmonic orchestra that has been renowned for its level, for the name of Arnold Kats whose role is difficult to be overestimated. It was very logical and absolutely right to dedicate the first Festival to the 90th anniversary of Maestro Kats.»

«In the project of Trans-Siberian Art Festival I see the continuity — from the past to the present — and the continuation of creative ideas of maestro Kats. I am extremely glad that I was able to infect Vadim Repin with this idea. Vadim began his big career ascent in Novosibirsk with our orchestra under the direction of Arnold Kats and when he saw the State Concert Hall named after Maestro he was imbued with consciousness of the necessity of the festival. Already at the first meeting, we agreed that the first festival would be dedicated to the approaching 90th anniversary of Maestro. I don’t want to anticipate events, but knowing Vadim’s plans I'm sure that our project will take a worthy place among the best festivals of the world.»

«When you stand in front of the unfamiliar team, you never know what to expect. It's not just about a quality, it is about humans: who knows whether there will be a communication between you, whether there will be a chemical reaction? Especially if you're from San Francisco and they are from Novosibirsk. It turned out that the musicians possess rich fantasy as well as seriousness; they can and they are able to search the depth of music. So our one rehearsal was worth three or four.
We never played the entire program. As Vadim said, the easiest for the professional is to pass a piece from beginning to end. Any professional orchestra will succeed. But it is not the most effective way when you need to build relationships with the music. We excluded this step and immediately began to be absorbed deeper. And at the concert, trusting each other, we «let» music free floating.»

"I have never met this orchestra before, but it showed so much imagination and such a serious approach to the work that the effect from one our rehearsal was like from three or four ones. We have achieved a lot and, having secured mutual trust, just let the music sounded. And this can be very exciting when people share each other's ideas."

«I want to say that all musicians of Novosibirsk Philharmonic Orchestra are great!!! Wonderful faces, even some of the violinists in tears — so touched by the music. It is very important for me. Musicians always play well when they enjoy. I have been on the stage for 27 years and I know that when they enjoy they are trying hard, and then there is something outstanding. So I hope that we succeeded. I thank them very much!»

«Great audience, great soloists and beautiful orchestra! And it is fantastic to play music like this. By request of Vadim Repin I made a humorous concert for the Festival. I performed such concerts many times and they are very popular. It is interesting that I did not have any difficulties with Novosibirsk Philharmonic Orchestra. I had experience with the orchestras that initially were overcautious. They told me about this orchestra: «Oh, be careful, this is a conservative orchestra!» But from the very beginning the musicians coughed, laughed, danced, did everything and with great pleasure. I see that the musicians of Novosibirsk Symphony Orchestra are very open».

«For a number of reasons maestro Valery Gergiev will not be with us today < ... > I decided to play Shostakovich concerto — the first time ever — without a conductor. Exclusively due to the highest artistic and professional level of Novosibirsk Philharmonic Orchestra, I 'm sure that it is possible. No one until today has dared to such kind of musical heroic deed. I am proud that the orchestra is ready to go with me. I believe in each of the artists of this unique team. This performance will be our next world premiere, which completed the first Trans-Siberian Art Festival!»

«Of course, the orchestra was the hero of the evening. Woodwinds and brass and violins headed by the People’s artist of Russia Valery Karchaguin — each group was in place, leading its party exactly and with confidence. From time to time Vadim Repin, as he later called it, conducted the orchestra «with clumsy movements ridiculous for them», but the musicians understood him perfectly, and this thread of interaction invisibly presented from the beginning to the end.
After the second part the melody flew, soared, reaching the depths of consciousness, turned soul inside out, what Shostakovich was a master. From time to time the heart stopped – if they make a mistake, go the wrong way without a conductor … No way! The musicians played on such a degree, in the euphoria that adrenaline seemed to boil over. Managed brilliantly.
Perhaps, this concert will become history not only of the festival and Novosibirsk Philharmonic Orchestra, but of musical life of the world in general.»


"I performed as a pianist with Novosibirsk Philharmonic Orchestra 10 years ago - and then my impressions were very good, and now they are even better. It is very important to me and I am pleased when the musicians come to me and say what my music means to them, they know my other compositions. When people from the orchestra come up to you - it's the highest compliment. I was very touched. In this orchestra it is absolutely no feeling that the work for musicians is a routine. You don’t meet such an attitude so often."

"Ravel sounds great on Siberian land! When I played the second part of his G-major concert, I thought about the quiet landscapes, vast snowfields of Siberia... I was impressed by a perfect combination: severe Siberian nature, frosts and great warm audience! It is a very risky venture – to play a concert program with a new orchestra on the day of arrival. But I want to applaud to Novosibirsk Philharmonic Orchestra - they are brave and daring musicians! Ravel Piano Concerto is a very complex work in which practically every instrument plays solo. Thanks to the good preparation of the orchestra, we could do with only one rehearsal. Excellent work, thank you!"

"Unfortunately, we had only two days of rehearsals. It is extremely little to do the work of such scale as Mahler's First Symphony. But today, the musicians proved themselves at the highest level, tumbled over themselves, and gave them wholly. I am very satisfied with the orchestra!"

"Without exaggeration, the hero of the festival and its fundamental pillar is Novosibirsk Philharmonic Orchestra, which performed five times with four different conductors (Gintaras Rinkevicius, Dmitry Yurowski, Leonard Slatkin, Charles Dutoit). Huge burden and great responsibility fell on the musicians of the orchestra, but remembering the amazing orchestra’s sound, the quality, creative enthusiasm and emotional depth of the programs, I want to shake all musicians’ hands and thank them for this impressive musical holiday".

«However, it is quite logical the Novosibirsk Philharmonic orchestra became the basis and the hero of the festival. A wide repertoire - from the popular "Bolero" by Maurice Ravel to a world premiere; accompaniment to the pianists, violinists, ensembles; work with different conductors – besides "native" Gintaras Rinkevicius (artistic director of the orchestra), the orchestra was conducted by Dmitry Yurowski, Leonard Slatkin, Charles Dutoit. The highest level of highly-trained, sensitive, flexible and mobile music ensemble was proved again!"


“Your orchestra is very good. The traditions introduced by Arnold Mikhailovich Kats, who created it and had headed for 50 years play a great role. It is a very rare case. But the orchestra continues its development without the maestro.
One can never meet such an attitude – believe me, I know very many orchestras.
Neither in Moscow, nor in Saint-Petersburg, nobody shows such an attitude to music, such a desire to understand the conductor, such a desire to go towards one another. Your soloists are wonderful, but the main thing, is that you not simply play, you create Music.
We played Weber’s First symphony – an unpopular composition, unfortunately, unlike Tchaikovsky, for instance. It was the first performance here, at the festival.
And we did it well.
I am grateful to Vadim Repin for the invitation to take part in the festival together with your wonderful orchestra – it turned out so that I never played with you; for the fact that I got acquainted with an amazing pianist – Nicolas Angelich and we performed the Second piano concert by Brahms – a complex and massive composition.
I hope our pleasure from communication was mutual.”