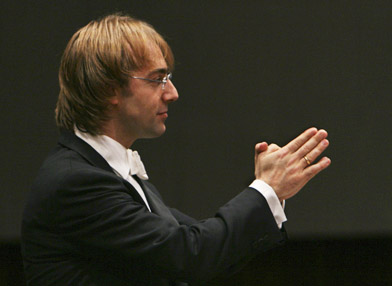 Recent engagements include his debut appearances with the Aarhus Symphony Orchestra, the Belgrade Radio Symphony Orchestra, the Czech National Orchestra, the Symphony Orchestra of the Bolshoy Theatre in Moscow, the Bruckner Orchester Linz, the Budapest MAV Symphony Orchestra (in Vienna's Musikverein, and the Thüringer Symphoniker in Rudolstadt. At the Banská Bystrica State Opera he recently opened a new production of Tosca, while for his own “Opera Vsem” festival in St Petersburg he conducted Borodin’s “Price Igor”, and  “Le Nozze di Figaro”. In addition, he will make return appearance at the Krasnojarsk Opera Theatre (Iolanta), as well as at Zurich’s Tonhalle.

During previous yars Fabio Mastrangelo has debuted at the Grand Theater of the Sejong Center for the Performing Arts in Seoul (2014), at the Summer Opera Festival in Busan, collaborated on permanent basis with the Moscow’s theatre “Novaja Opera” (since 2013) and Arena di Verona (since 2008), took part in the Puccini Opera Festival in 2010 with Tosca, returning in 2016 with Bohème, debuted at the National Opera Theatre in Rome in Bob Wilson’s Aida. In 2012, he opened the opera season of Bologna's Comunale with Turandot. He made his St. Petersburg operatic debut in 2002, with Traviata at the Mussorgsky State Theatre (now Mikhailovsky) and is a permanent guest at the “St. Petersburg’s Palaces” festival.

For a number of years, he has been a guest conductor of the Mariinsky Theatre in St. Petersburg, which he joined in April 2007 debuting with Tosca (Guleghina, Galuzin). In June 2008, he made his first “Stars of the White Nights” appearance replacing at short notice Valery Gergiev and returning since every year. In February 2016, he conducted a premiere performances of Andrea de Rosa’s newest production of Verdi’s Simon Boccanegra. He is awaited back in March 2017, for a new production of Verdi's Vespri Siciliani.

Previous appointments include that of Music Director of the Ekaterinburg State Opera & Ballet Theatre, Principal Conductor of the St. Petersburg State Hermitage Orchestra and Musical Advisor of the Petruzzelli Opera Theatre of Bari.

Still active as a pianist, he performed an extended cycle of Mozart Piano Concertos with the Hart House Chamber Strings, conducting from the keyboard. Between 2001 and 2006, he was Artistic Director of five editions of the festival Etoiles du Chateau de Chailly (Chailly-sur-Armançon France) performing chamber music.

Born in Bari, he begun piano studies under his father’s guidance at age 5. He later graduated from the Conservatorio di Musica “Niccolò Piccinni” of Bari under Pierluigi Camicia, the Conservatory of Geneva under Maria Tipo, and the Royal Academy of Music in London, where he was granted a Piano Performer Diploma. He attended masterclasses with Aldo Ciccolinis, Seymour Lipkin, and Paul Badura-Skoda and won 1st prize in the piano competition of Osimo (1980) and Rome (1986).