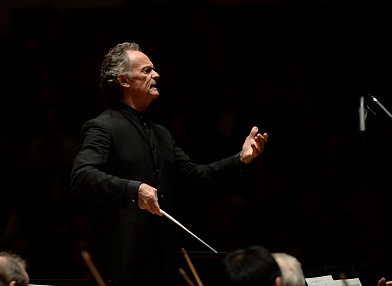 March 21st 11-year-old violinist Leia Zhu, laureate of prestigious contests, called the "violin princess" and the conductor Jean-Claude Casadesus will feature at Arnold Kats State Concert Hall with Novosibirsk Philharmonic Orchestra. The concert "Vive la France!" will include the compositions of French composers and will be the part of the program of the Vth Trans-Siberian Art Festival.

On 21st of March Novosibirsk Philharmonic Orchestra under the direction of one of the largest French conductors Jean-Claude Casadesus will perform “The Fantastic Symphony” by Berlioz, Prelude "The Afternoon of the Faun" by Debussy and the virtuoso Fantasia "Carmen" by Bizet-Waxman. The soloist in the latter will be 11-year-old Leia Zhu, who is being called “wunderkind” and "princess of the violin".

Solo debut of the violinist took place when she was four years old before an audience of several thousand people in the City Hall of Newcastle, at six she went on the first European tour: in nine cities in Spain, Leah Zhu performed with the Los Angeles Classical Concert Orchestra. Her concerts take place in Great Britain, Russia, Belgium, Spain, Italy, Greece, Austria, Israel, USA, Czech Republic, Bulgaria, Germany, France and Switzerland. Her listeners were the Queen of Spain, the Princess of Jordan, the former German Chancellor Gerhard Schroeder, the daughter of Yehudi Menuhin Zamira, the movie star Michael Douglas. Among the numerous awards of the violinist - I prize of the XVI International TV Contest of Young Musicians "Nutcracker" in Moscow and Grand Prix of the competition "Young virtuosos 2015" in Bulgaria. Leah Zhu's performances are regularly broadcast by major international TV channels. Leah Zhu takes a weekly lesson from Yitzhak Rashkovsky, and studies at Zakhar Brohn's master classes.

Jean-Claude Casadesus was trained in conducting at Pierre Dervo and Pierre Boulez. His influence on the French orchestral environment was extremely significant: the chief conductor of the Paris Opera and the Opera Comedian from 1969; co-founder with Pierre Dervo and head of the National Orchestra of the Loire Country (1971); founder (1976) and more than 40 years as chief conductor of the National Orchestra of Lille, with which he performed in 33 countries on 4 continents and produced more than 30 recordings. Being a passionate defender of modern music, Jean-Claude Casadesus established the position of permanent composer in Lille and since 2000 has been heading the French association for the promotion of contemporary music "Musique Nouvelle en Liberté". Since 2016 he is president of the Higher School of Music and Dance of Lille. As an invited conductor he worked in Europe, Asia, North and South America. Commander of the Order of the Legion of Honor and the National Order of Merit, Order of Arts and Literature, Oranski-Nassau Order (Netherlands) and officer of the Order of Leopold I (Belgium).

The concerts of the fifth Trans-Siberian Art Festival, headed by Vadim Repin, will be held from March to July 2018. The festival program in Novosibirsk will end of 2nd April, though the Russian part of the Festival will last to May 13 and will include Krasnoyarsk, Moscow, St. Petersburg and Samara in its route. By tradition, small towns of the Novosibirsk region will not be left without attention, the list of which has expanded significantly this year: Berdsk, Krasnozyorskoe, Toguchin, Karasuk.The foreign part of the route will take place in the USA and Japan in June and July.

The key point in the geography of the festival is Novosibirsk - the hometown of the artistic director of the project. One of the key participants in the project is Novosibirsk Philharmonic Orchestra. Vadim Repin repeatedly stressed the decisive role played by the collective in implementing the idea of ​​the Trans-Siberian Art Festival. The main venue of the festival always remains the Arnold Kats State Concert Hall - the new Philharmonic Hall opened in 2013 and, according to Vadim Repin, has become one of the necessary conditions for the implementation of the idea of ​​the festival.