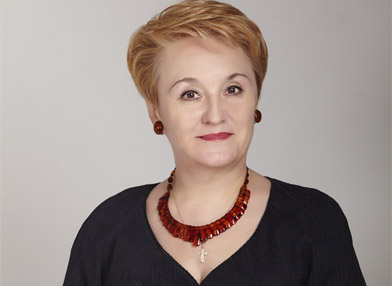 In 1989 graduated from The Gnessins state musical-pedagogical institute: conductor of a folk choir and solo folk singing (with Professor M.K. Meshko).

Since 1982 she has been teaching at the Music College named after A.F. Murov, she is a Head of the department of folk choir conducting. Among her students there are laureates of all-Russian competitions. Having a great talent of love — love of song, of national traditions, of people, Olga Gurina managed to realize herself as a versatile person, as a professional. Extraordinary personality, gifted teacher-innovator, whose desire and ability to communicate with young people is based on a deep study of traditional folk pedagogy and sensitive natural intuition.

Olgs is actively engaged in research; she organized and carried out more than twenty folklore expeditions to Novosibirsk region. According to the materials of these expeditions four collections of folk songs are released. Gurina develops and creates new collections of costumes for the various programs of the ensemble «Rozhdestvo», working carefully and attentively with authentic examples of folk costumes.

She realizes an educational activity in several directions: TV and radio recordings, school-workshop «To preserve and revive the folk traditions».

Olga Gurina is not only a teacher, researcher and organizer, but she is also a wonderful artiste. With the Russian academic orchestra (conductor Vladimir Gusev) she made a number of library records on the radio.

In life and on the stage, she is always sincere, beautiful, young, and energetic. Her voice has a bright, unique colorful timbre. She is great in different fields — from traditional folk to classical music.