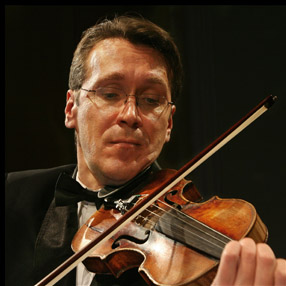 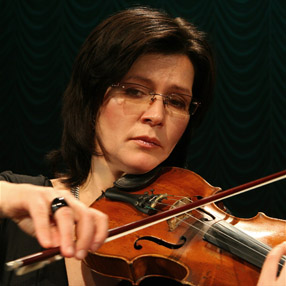 Born in 1958 in Sverdlovsk.
In 1982 graduated from the Ural State Conservatoire named after M.P. Mussorgsky (class of M.I. Auzdicher).
Winner of the All-Russian Violinist Contest (Kazan).
After graduating the Conservatoire artist of the Academic symphony orchestra of the Novosibirsk Philharmonic Society.
Since 1991, working in the symphonic orchestra, performs as a member of the Filarmonica-quartet.
During studies at the Conservatoire started pedagogical activity — in the Music School (Sverdlovsk). From 1995 has been teaching violin in three schools of Novosibirsk: Central special music school, Music College named after A.F. Murov, Novosibirsk State Conservatoire named after M.I. Glinka.
Performs as a soloist with different orchestras (concerts by I.S. Bach, W.Mozart, A.Shnitke). 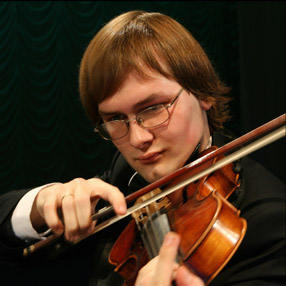 was born in 1984 in Barnaul.
In 2002 he entered the Novosibirsk State Conservatoire in the name of Glinka (class of the Docent I.V. Poliakiva). At the present, he attends the magistrate courses at the same institute.
He is a laureate of many competitions, All-Russian competition Magic Bow (Perm, 2002, prizewinner), West Siberia — East (Novosibirsk, 2003, I prize), international Competition Hope (Krasnoyarsk, 2004, III prize), International Competition (Vladivostok, 2005, I prize), and others.
He performs both as an artist of the Orchestra (Mozart Concert Symphony) and as a soloist with his own recitals (Bach, Paganini, Bartok, Ernst, Hoffmeister and Bizet- Vaksman).
Ilya was awarded the order Young Talent of Russia in 2006. The same year was the time he became a member of the Filarmonica quartet.
He is a laureate of the International Competition among young string performers (I prize, Toliatti, 2007). 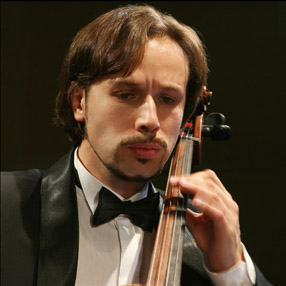 Born in 1974 in Novosibirsk.
In 1998 graduated from the Novosibirsk State Conservatoire named after M. Glinka. In 2001 finished a solo post-graduate course at the same institute. While a student he started working as a soloist of the orchestra of Novosibirsk State Academic Opera and Ballet theatre (1993–2000).
2000 — 2004 concertmaster of the cello-group at the Chamber Orchestra of Novosibirsk State Philharmonic Society.
2004 till now artist of the Novosibirsk Academic Symphony Orchestra.
Performed with the recitals as well as together with different chamber ensembles. One of the creators and participants of Cellissimo-quartet.
Recorded an album with the organist G.Nikulin, three CDs as a member of the Novosibirsk string quintet.
Has performed many times as a soloist with orchestras (concertos by D. Schostakovitch, L. Boccerini, S.Gubajdulina). Stanislav Ovchinnikov played double concertos with such famous soloists as Youri Shishkin (bayan, Moscow), Mark Drobinsky (cello, France). Leads a cello class at two educational institutions: at the Musical college named after A.Murov (from 2000) and at the Novosibirsk State conservatoire named after M.Glinka (from 2004). There are some Laureates of International concourses among his students. He is a leader of the methodical section of cellists in Novosibirsk.