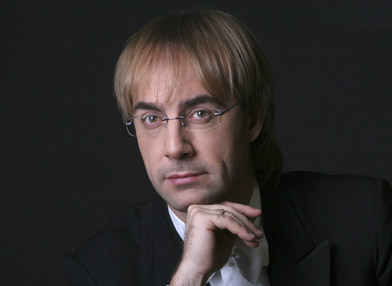 Fabio Mastrangelo was born in Italy, the city of Bari. When he was five years old, his father began to teach him to play the piano.

Fabio Mastrangelo graduated from the conservatory named after Puccini in his native city, then from the Geneve conservatory and the Royal academy of music in London, in the class of M.Tipo. He attended the master-classes of A. Chickolini, S.Lipkin and P.Badura-Skoda, he received first prizes at the national pianists competitions in Osimo (1980) and Rome (1986).

1986 — his first work experience. Fabio was a conductor assistant in the Bari theatre. He worked with such famous singers as R. Kabaivanska and P. Capucilli. Then Mastrangelo started studying conducting in the Academy of Music in Peskar in the class of G.Sirembe and in the university in Toronto. He took classes from such famous conductors as L. Bernstein and K. Osteraichter in Vienna, in the Academy of Saint Chechilia in Rome, attended master-classes of N. Yarvi and D. Panula.

From 2001 to 2006 — an artistic director of the festival L’Etoiles de Chateau de Chaiee, France.
Starting from 2006 F.Mastrangelo is a musical director of the youngest opera theatre of Italy Fondazione Lirico Sinfonica Petruzzelli in Bari, which is one of the most prestigious theatres together with Milano theatre La Scala, Venice La Fenice, and Naples San Carlo.

Collaborates with a record company Naxos.
He periodically performs as a pianist with the Russian cellist S.Slovachevsky.
Starting from 2007 Fabio Mastrangelo is the principal guest conductor of the Novosibirsk Academic Symphony Orchestra.