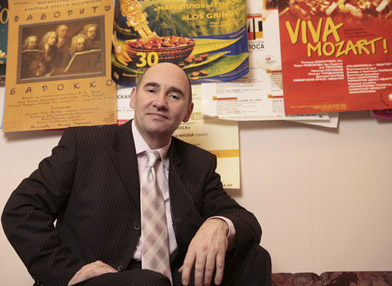 Born in 1961 in Novosibirsk.
In 1986 graduated the conductor-choir faculty of the Novosibirsk state conservatory named after M.Glinka (with professor N. Khoshabova).

1985 1987 choirmaster or the Novosibirsk chamber choir under the direction of Boris Pevzner.
1987 1992 choirmaster and later conductor of the Georgian state choir capella.

In 1993 he is back to Novosibirsk from Georgia and creates his own ensemble Choir ensemble «Markell’s Voices». The aim of this ensemble is to perform forgotten chef-d’oeuvres of ancient Russian church music, scared compositions of West-European Renaissance and Baroque.

1995 1999 head of the chair of Ancient music, opened by his initiative at the Novosibirsk state conservatory named after M. Glinka.

2002 assistant conductor of the Vienna chamber choir.
2003 as a choirmaster prepared the famous Arnold Schoenberg Choir to some projects under the direction of N. Harnoncourt.

2002 2005 taught at the Vienna Conservatory at the chair of Ancient music (madrigal ensemble).
Returned to Russia in 2005 and headed again the Choir ensemble «Markell’s voices» of the Novosibirsk state philharmonic society.